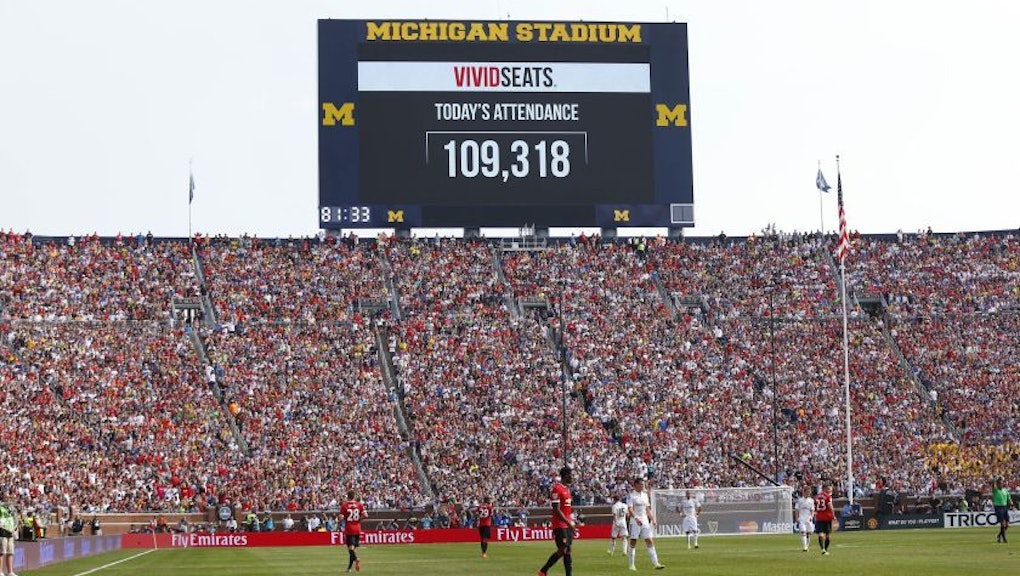 One Picture Proves America May Finally Be Ready for Soccer

During a friendly match between UEFA powerhouses Manchester United and Real Madrid, a staggering 109,318 fans packed into the University of Michigan's Big House and broke a 30-year-old U.S. soccer attendance record previously set at the Rose Bowl during the 1984 Olympics in another soccer match between France and Brazil.

Of course, there's a certain amount of over-excitement generated by the advent of such major UEFA teams and stars like Cristiano Ronaldo, but the fact remains that 109,318 people bought tickets to a soccer match in Michigan on Saturday. That's a staggering number and one that should indicate that the U.S. is ready for more soccer.

And what about 3.2 million? That's the total amount of viewers that streamed the Germany-U.S. World Cup match on ESPN's live-streaming channel. But that was online only.

How about 25 million? That's how many Americans watched the U.S.-Portugal group game across two television networks, ESPN and Univision.

GOOOOAAAAALLLLLLLLLL: Across the U.S., soccer is becoming an increasingly popular, respected and viewed sport. Cities like Seattle have already proved that a thirst for professional soccer is ready to be quenched, and the fact that New York City just added a second MLS team proves that soccer in America is becoming a more than once-every-four-years phenomenon. Americans want soccer and soccer wants America. Let's make this happen team.