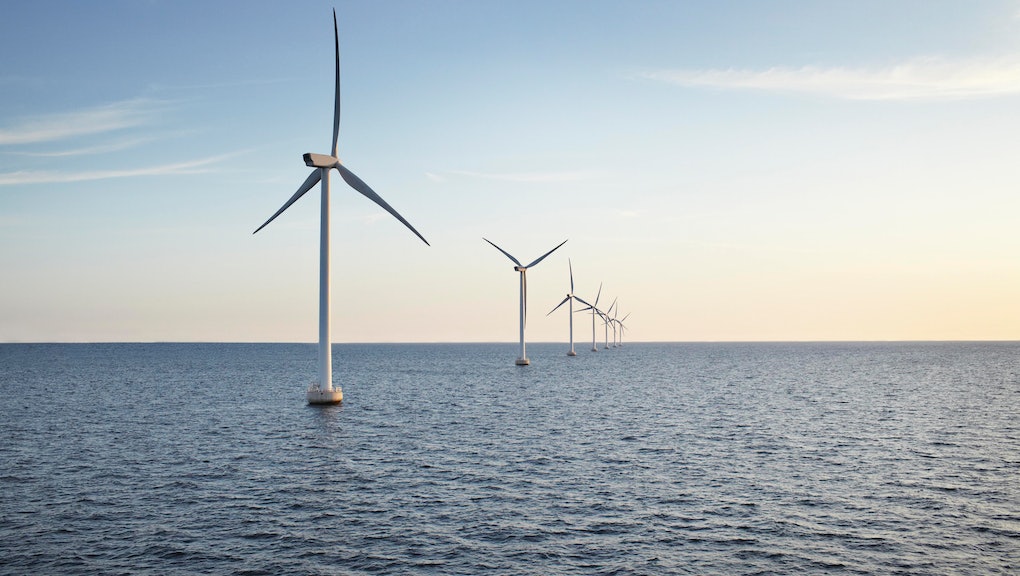 A European City Is Taking a Major Step to Fight Climate Change That the U.S. Never Would

The news: The Danish are taking a massive step forward to offset their contribution to climate change — they plan on making Copenhagen, the capital city, a net zero contributor of atmospheric carbon by 2025. If successful, Copenhagen will be the world's first carbon-neutral capital.

Newsweek reports that Copenhagen recently completed three electricity-generating windmills and hopes to construct an additional 97 to raise the country's share of renewable wind power from 33% to 50% by 2020. Mayor Frank Jensen says "it's a must" for the city go entirely carbon-neutral. Eighty-nine percent of the city's citizens support the plan.

To encourage Copenhagen's citizens to participate in the switch (and live close to a windmill), the city is selling turbine production shares that will allow households to offset their power consumption more or less entirely. The plan isn't cheap, with Newsweek releasing estimates around €3.6 billion ($4.8 billion) until 2025. But the plan's architects say it is a necessity — something many American lawmakers don't understand.

The background: Compare Copenhagen to the U.S., which according to Energy Information Administration figures generated around 13% of its total electricity supply from renewable sources in 2013. That makes the U.S. the world's second-largest net producer of clean power and its total wind, solar, hydroelectric and geothermal generation has increased a massive 250% from 2004-2013.

But while those aggregate terms don't paint a terrible picture, pollution-plagued China is actually the world's largest producer of clean energy. Coal, one of the dirtiest ways to generate power, still provides around 39% of American electricity. Though the renewable energy sector is growing rapidly, overtaking the existing power generation infrastructure of entire nations is a mammoth task that will take decades. For example, the Wall Street Journal points out that all ten of the U.S.' largest power plants are coal-burning facilities:

Worldwide, while renewables are still providing an increasing number of global electrical supplies, investment isn't keeping pace. A major UNEP-Bloomberg New Energy Finance Report says that global investment fell 14% in 2013, which the paper's authors told the BBC may have been due to governments' ambivalence on subsidy costs and uncertainty among investors.

The good news is that if governments set firm policies to encourage clean energy, investing could easily speed up. The Center for American Progress writes that government involvement, industry support and capital investment are all that's needed to make renewable energy go big.

Unfortunately, the tax credits supporting the United States' renewable power sources are set to expire soon. Conservatives are widely skeptical of both the science behind climate change and federal efforts to take action, making a proposal like Copehagen's a dead end.

Why you should care: Because Copenhagen has a long history of environmental friendliness, its ambitious plan will be easier to accomplish. But it also clearly demonstrates that with sufficient investment, governments can successfully create environmentally healthy, emission-limited cities. Policymakers should take note that wind, solar, hydroelectric and geothermal power are all long-term winners and encourage American cities to adopt similar policies. The Copenhagen plan could never succeed in today's political environment, but it should, and it has to.