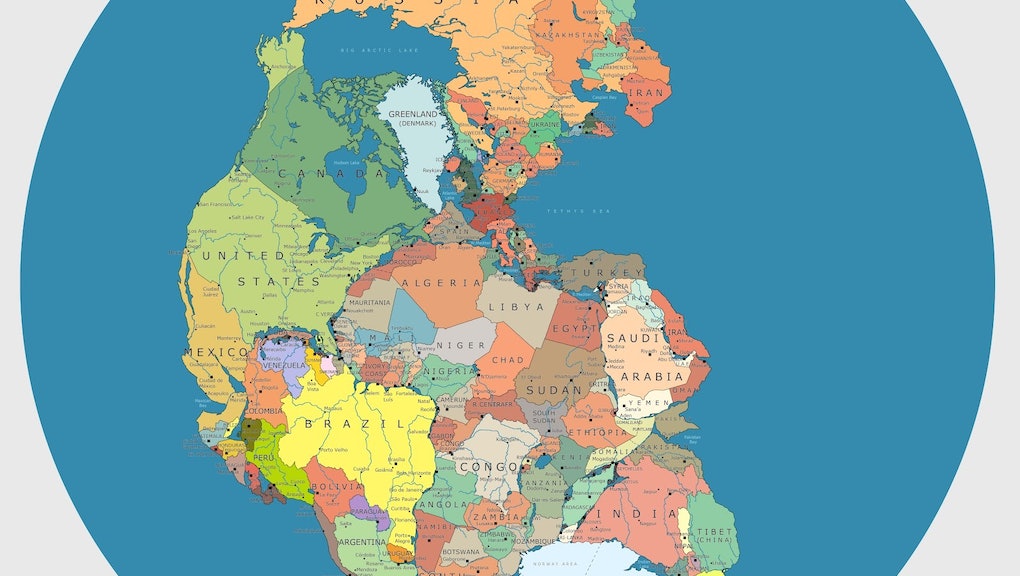 Who Your Neighbors Would Be if Pangea Never Broke Apart

This is pretty cool. Redditor kilosafe uploaded this map from artist Massimo Pietrobon, which shows exactly which nations would border each other if the supercontinent of Pangea hadn't started breaking up around 200 million years ago. If you ask me, it looks a little like Game of Thrones' Westeros:

Re-writing history: Because of factors like shifting oceans and mountain landscapes, this might not be an exact representatation, but if you want to fantasize a little, this massive contiguous landmass would have resulted in radically changed politics across the globe. Without two oceans separating North and South America from Europe, Eurasia and Australia, the landmass where the U.S. is now located probably would have been in contact with other civilizations for thousands of years prior. Ultimately, that means the European conquest of the Americas likely never would have happened and the descendants of the 95% of Native Americans estimated to have been wiped out by the conquerors' diseases would still be around today.

Much of Africa and India would be located close to the Antarctic, which — by the way — you could just stroll on over to. Instead of hot, they'd be frigid.

As NPR's Robert Krulwich writes, the nation known as Iran wouldn't even exist as one landmass, while Florida, of all places, would likely be one of the epicenters of this strange world's cultural and commercial exchanges: meeting at the junction of Africa and the Americas, with some inland seas to boot.

China and Russia ultimately don't seem like they'd be all that different, separated somewhat from the rest of the world by land and oceanic barriers.

This is all truly idle speculation, since not even the smartest historian could reliably tell you how human culture would have evolved across this singular supercontinent (or if we'd exist at all). But it is fantastically fun to think about.