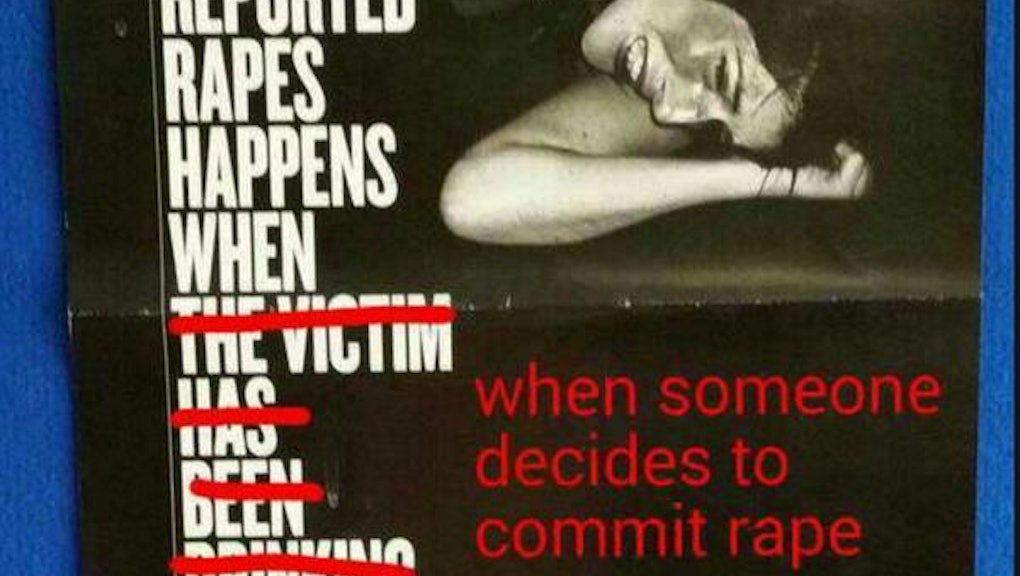 England's National Health Service (NHS) has landed itself in hot water after what appears to be tone deaf — and lazy — recycling.

The controversy stems from a rape awareness campaign, "Know Your Limits," created between 2005 and 2007 by the NHS and circulated to hospitals and clinics.

The campaign, presumably intended to raise conscientiousness among women, faced some backlash at the time, but has been the subject of even more fury more recently because the poster still appears in a number of hospitals and clinics, seven years after NHS stopped the "Know Your Limits" campaign.

Many of those angry with the campaign believe it to promote victim blaming. Indeed, the NHS Twitter handle has been deluged by complaints, and there is also a Change.org petition that so far has been signed by more than 100,000 people.

As indicated by the response, the posters have clearly struck a nerve, and for good reason. Being cognizant of one's drinking is always good advice, and so is the fact that alcohol is so often a factor in sexual assaults. But just being aware of past patterns is not enough — these types of large-scale govermental campaigns are not going to eradicate rape culture by eliminating drinking, just as they won't be able to do so by telling women to dress more conservatively or never walk home alone at night.

The Pennsylvania Liquor Control Board made a similar mistake a few years ago with its ad campaign "Control Tonight" that targeted teen drinkers with the slogan, "She didn't want to do it, but she couldn't say no." As Feministing noted at the time, "While the board may have had good intentions, these ads show that rape culture is alive and well in our society. Alcohol is definitely a huge factor when it comes to sexual assault, but in no circumstances is it ever the victim's fault ... And instead of teaching people how to make sure they're properly getting consent from someone they're hooking up with, our society perpetuates a mindset that makes women feel guilty for a crime committed against them."

That's also the point @neverjessie's "edited" poster makes: With or without alcohol, rape always happens when someone decides to rape.

For its part, the NHS has been rather blind-sided by the outrage given that it stopped running the campaign in 2007. According to The Huffington Post UK, a Department of Health spokesperson told them, "This campaign is no longer used. Posters have not been in stock, or available on websites for several years. The problem is an issue for surgeries and hospitals displaying the poster. If they are still up after six years they should not be because the campaign has been refreshed since."

While it's important to call organizations out for outdated and potentially damaging campaigns, it's also important to remember that outrage for outrage sake isn't necessarily productive. A problem as systemic as rape requires comprehensive change, on both a cultural and organizational level. So let's keep the discussion moving forward.