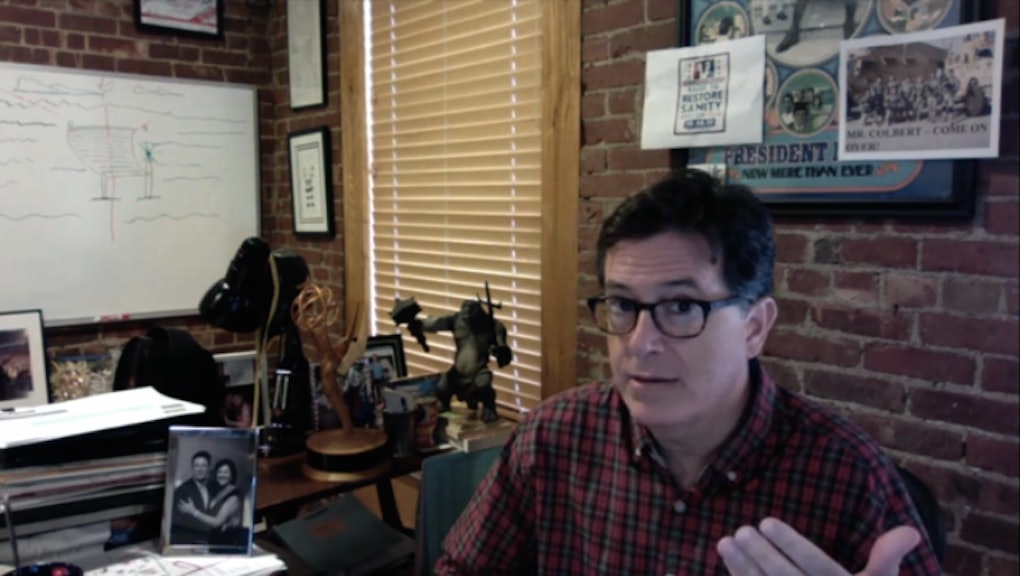 The news: Stephen Colbert is best known for his ultra-conservative television character, but in a new video, he drops the act and gives us a glimpse of au naturel Colbert — one who delivers heartfelt advice on love, life and relationships.

Colbert filmed the segment as part of Rookie magazine's "Ask a Grown (Man or Woman)" series, which asks celebrities to answer questions posed by readers. Dressed in a flannel shirt and glasses, Colbert responds to Maria from Mexico City, who asked how to tell when someone likes you.

"People show that they like you in all kinds of different ways. But some basic ones are ... they want to hear your stories. They care how you feel. They want to make your day better. They want to listen to your problems. They reach out to you. ... One nice definition of love, I think, is that another person's happiness is more important than your own."

Colbert in the flesh. The video draws much of its power and gravitas from Colbert just being himself. His Colbert Report character is so brilliant partially because it's so unyielding — he's always in it. To see him break from it to show another side of him is remarkable because it's so rare.

He's also doing it for an unselfish reason: Colbert's not revealing real-life Stephen for promotional reasons; he's doing it to provide advice for young women and anyone else who needs it. He touches on serious topics — love, misogyny, parental relationships — but does so in a way that manages to be both unpatronizing and humorous.

Stephen, if you're reading this: You're the dad or uncle we all secretly wish we had sometimes. We'd will you to come out of character more often, but that might ruin the magic.