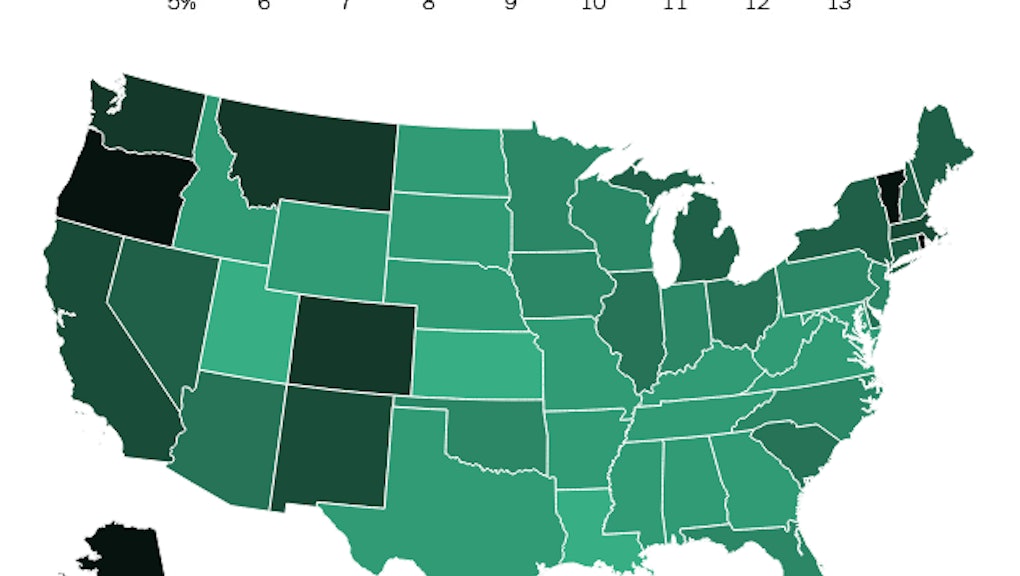 The news: People smoke from coast to coast and the world over, but certain states love the chronic a little more than others. This map from the Washington Post's Christopher Ingraham shows you exactly where the densest clouds of pot smoke are forming across the U.S.:

The data: You can find the whole interactive at Wonkblog here, but here's a rundown of the biggest points:

- Rhode Island is a national leader, with 13% of residents toking up (Does that mean it's time for Rhode Island to change their motto from "Hope" to "Toke"?) Alaska runs very slightly behind at 12.97% and Vermont is third at 12.86%, both well within margins of error — so any one of these three could be number one.

- Seven percent of Americans above the age of 12 have smoked, eaten, or otherwise ingested marijuana in the past month, putting it nowhere close to the 66% of Americans Gallup says drink regularly.

- But as far as illegal ways to get high go, weed is king. SAMHSA estimates that just 3.27% of Americans used drugs other than marijuana in the past month nationwide.

- Most marijuana users are most likely to fall into the 18- to 25-year-old gap (coming in at nearly one in five). In many states, 25% or more of people in that age group smoke.

- The two states with the highest percentage of older smokers, Oregon and Alaska, are both considering legalization initiatives this year.

- Only three states have reported usage rates below 5%: Louisiana, Utah and Kansas.

A revealing data map: Marijuana has been booming. Reliable polling by Pew says that 48% of adults now admit trying marijuana at least once, up from 38% in 2001 and 2003. With people of all age groups smoking more than ever, it's tempting to worry — as some conservative commentators do — that legalization will usher in an even greater tidal wave of marijuana use.

But the trend of rising marijuana use isn't a recent phenomenon: It's a demographic shift. Mountains of reliable research has found no link between looser restrictions on weed and higher rates of use, while teen use appears to have passed its peak. And as the chart above illustrates, the cat's out of the bag and there's no getting it back in. It makes no sense to keep locking people up for something they're almost certainly going to do anyways.

Given these trends, America is at a crossroads. Policymakers can get it right and start dealing with marijuana in a way that makes sense: as a minor vice among responsible adults and a health concern for heavy users and teenagers. Or they can continue locking people up, even though it's clearly done nothing to reduce drug use.