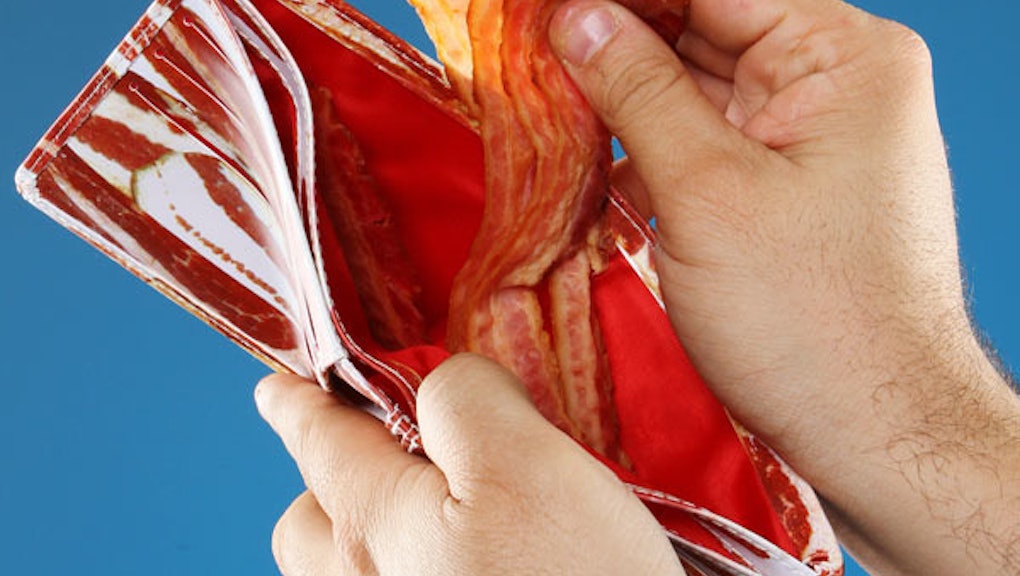 The World's Bacon Craze Just Came Back to Bite Us

The news: Bacon is about to fry a hole right through your wallet.

Everyone's favorite cut of pork is now much more expensive than it's been in the past three decades, with prices reaching an all-time high of $6.11 per pound — an astonishing 41% higher than just two short years ago. Some markets' prices are rising even more rapidly; one Brooklyn meat market employee told the New York Post that the price of a half-pound slab of bacon has gone up a dollar to $3.99 in the past month alone.

To put this in perspective, Time was already suggesting that people should start hoarding bacon three years ago — when the price was $4.77.

As the Huffington Post's Joe Satran observes, the staggering rise in bacon prices holds true even after accounting for inflation.

What's causing this? A combination of price-jacking factors has descended upon the pork industry simultaneously, making 2014 particularly expensive for fans of bacon.

The first and likely most severe variable is a lethal outbreak of porcine epidemic diarrhea (PEDv), which is probably even more disgusting than it sounds (normal pig waste is gross enough). The New York Times says that the number of hogs slaughtered is down around 4.2% so far in 2014 compared to the same time period last year. PEDv had never been seen in the U.S. before 2013, a disease that kills large numbers of piglets, suppressing production. Vaccinations and other countermeasures have proven only partially effective and millions of pigs may have died.

Meanwhile, bacon demand remains super high after beginning to grow dramatically in 2011. Texas Pork Producers Association EVP Brandon Gunn says that restaurants ranging from fast food chains to high-end chophouses have incorporated bacon "into all parts of their menu more now than ever before," far out-competing demand for other cuts of pork.

Finally, the ongoing drought across large stretches of California and the Southwest — much of which the U.S. Drought Monitor considers severe, extreme or exceptional — has negatively impacted cattle herds, causing more consumers to shift to pork in general.

Not my delicious bacon!? Simply put, there's not enough bacon to go around and everyone is still in bacon-craze mode, so it's not surprising that prices are going through the roof. What used to be a relatively cheap cut of meat is now rapidly becoming a premium product.

Meat lovers' worries don't end there: Beef is expected to become more expensive in coming months, too. Satran noted that coffee and orange juice are also seeing price surges, meaning bad news for breakfast in general. Even eggs are up. In other words, your breakfast is a lot to get much more expensive.