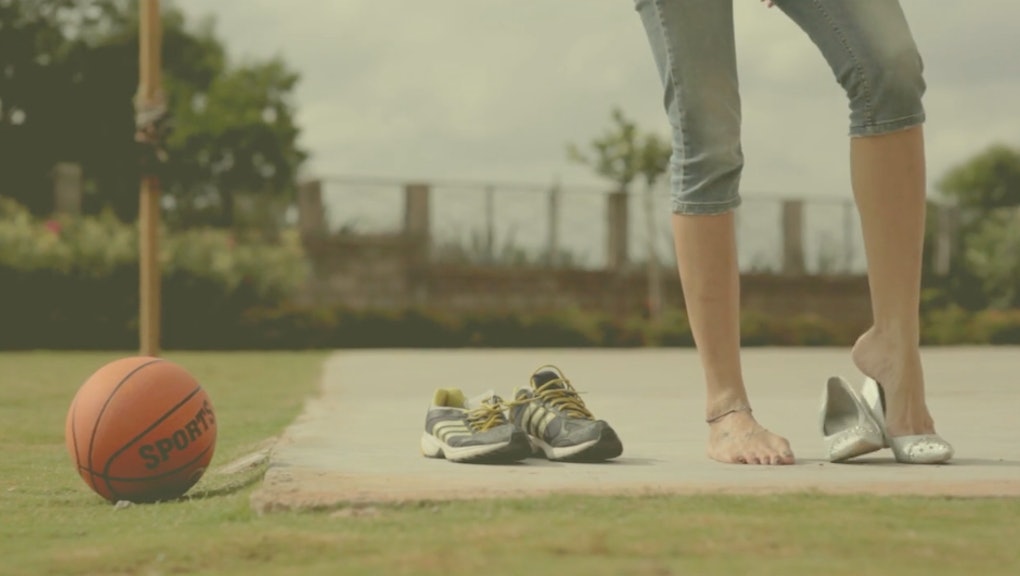 Powerful Video Reminds Us All What Rape Is Really About

What do the pink toy aisle, Bollywood and sexual violence have in common?

A new video featuring Indian anti-rape campaign No Country for Women (NCFW) does an excellent job of explaining how gender policing contributes to rape culture. Its insistence that rape is not the result of sexual frustration also reminds us of an important concept that tends to get lost in these discussions: Rape is not about sex, it's about power.

Because rape is not always about sex from Amrit Vatsa on Vimeo.

NCFW is an ambitious campaign meant to "to change the problematic attitude of a country toward half of its population." Since 2013, co-Directors Ria Vaidya and Shreena Thakore, both undergraduates at Brown University who grew up in India, have been conducting workshops to spread their message of combating sexual violence. They state in this video:

Gender policing by definition is when you force an individual to behave a certain way because of their gender. So, for example, if you see a man crying you tell him, "Stop acting like a girl." Or if you have a daughter who really loves playing football, but you enroll her in singing class and not football class ... because girls are supposed to like artsy things and not supposed to like sports, you are gender policing your daughter.What is the connection between gender policing, which is so common ... and something as heinous as rape?

It's an excellent question. Gender policing can be extremely subtle and is often well-intentioned, making its harmful effects all the more difficult to spot. Nevertheless, it is all around us, from the pink aisle at the toy store to popular — and problematic — parental affirmations such as "boys will be boys."

To be clear, gender policing certainly does not actively endorse rape. But it does foster an environment in which men and women are expected to behave in a certain way, and implies that they may be punished if they don't. One of gender policing's most egregious forms, for example, occurs when a society valorizes female purity and, by default, demonizes promiscuity — that is, a deviation from the way society says a "lady" should act.

When it comes to power dynamics, these types of societal expectations are very troubling. As the video points out, "The kind of mindset that feels like rewarding a female for acting and appearing like one is not very different from the mindset that feels like punishing a woman for not acting like one." Such a mindset can allow things like slut-shaming and victim-blaming to thrive. Taken to an extreme, twisted conclusion, it may even lead to rape.

To illustrate this point, the video mentions the horrific 2012 Delhi rape case, in which six men brutally raped and murdered a 23-year-old woman on bus. The perpetrators reportedly said they had wanted to "teach [the victim] lesson" for being out late with a boy.

The film's narrator and director Amrit Vatsa says, "As long as we keep seeing rape merely as a sexual act, every time we get angry by some incident that shakes us up, all that we end up saying are things like bring justice, hang the rapist ... but that's just not enough. ... We have to stop gender-policing."

Powerful videos like this one may make more people reflect on the negative effects of cramming human beings into rigid gender boxes. Thakore concludes, "We know that it takes a long time and a lot of hard work to change an entire country's attitude, but it has to start somewhere, and we're really hoping it starts with you."

If you'd like to do more, you can donate to NCFW's Indiegogo campaign to fight rape and victim blaming in India here. Read director Amrit Vatsa's blog post about the documentary along with more ways to get involved here.