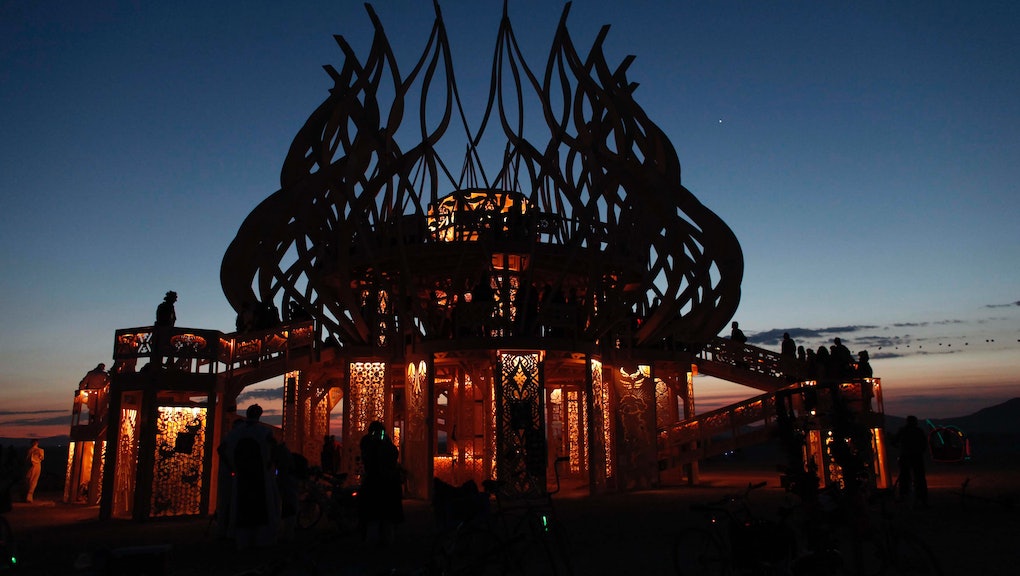 Burning Man is synonymous with a lot of things, most of them involving hallucinogenics. But while the week-long community-building festival is seemingly indescribable — the website says "trying to explain what Burning Man is to someone who has never been to the event is a bit like trying to explain what a particular color looks like to someone who is blind" — there are a few tangible elements that make the festival renowned beyond the deserts of Nevada. One of those things is the art.

While the artistic element of Burning Man may be well-known, its cultural importance is often unsung, even while Burning Man is progressing the modern art conversation forward. How is exactly is Burning Man doing that? By making the public installations interactive and immersive on a level we too seldom see.

Burning Man has incorporated interactive art for years, but the preview of 2014's exhibited works really drives home the desired role of the audience in each installation. The art of Burning Man 2014 is almost universally designed for touching, interacting with and experiencing. And in today's artistic landscape, that sets the art apart.

There is "The Lost Tea Party," a travelling Dali-esque tea party hosted on stilts.

There is "Pulse and Bloom," electric lotuses that respond to the touches of onlookers.

There's also the "Minaret", reprised from 2010, a psychedelic totem pole that people can climb all over.

Sure a lot of these tactile installations are catering to an inebriated audience, but there is something to the idea that art today should be interactive and explored.

The majority of sculptures and installations exist with no desire for the public to actually get up close and personal with the work. They are delicate, valuable and we are as viewers are not trusted to engage with them. Alarms sound at most museums when you get too close to the work and climbing a public sculpture would often get you a reprimand from the police. Even when there is no sign, no steward, no security alarm, art can sometimes just be too intimidating to be touched.

In 2011, this became the subject of Spanish art collective Luzinterruptus' project "Touch! Touch! Nothing Will Happen … " when they attached silicone nipples to sculptures in the Museum of Public Art in Madrid.

More than just being tactile Burning Man's artworks also ask to be fully interactive and integrated into people's daily experiences. The "Wheel of Fortune" installation, a spinning wheel of tarot cards, includes a public space that seeks to be, as project designer Jill Sutherland told the Huffington Post, "a place for personal reflection, card readings, high teas, and insight."

Burning Man's works this year are also committed to making art as engaging mentally as it is physically. A desire that touches on an ongoing debate in the art world about whether art in public spaces should focus on ideas rather than touchability. Art historian Chere Krause Knight cites a quote by critic Patricia Phillips to make just this point in her book Public Art: Theory, Practice and Populism. Phillips says of truly public art that "it is public because of the kinds of questions it chooses to ask or address, and not because of its accessibility or volume of viewers."

The Burning Man works incorporate this made-you-think idea as well. Artworks like "The Vulvatron," a traveling vulva-shaped experience designed by a group called the Clitterati, seek to create art that opens up a discourse as well as offering itself up to be interacted with. "We're using this opportunity to engage in conversation," lead designer Rebecca Frisch told the Huffington Post, "and we're eager to help each other explore our triggers and push social boundaries imposed by our culture."

The Burning Man artists are, thankfully, not alone in their interactive pursuits. Marina Abramovic's current show at the Serpentine "512 Hours" allows audience members to discard all communication devices and electronics and just exist in the gallery space with the artist in close quarters. Banksy's residency in New York last year played a lot with how people are expected to interact with art and artists by bringing installations to the streets and even selling his art undercover. Secret Cinema and immersive theater company Punchdrunk have made films and theater a more engaging public experience by allowing people to treat artforms that traditionally carry on without them as tangible, malleable worlds.

These are just a few examples, but proof that there is an audience for art — expensive, gigantic art — that people don't just want to see. They also want to touch it, talk about it, change it. Burning Man's artists have made it their modus operandi to create art that is both touchable and touching, the movement of modern art could take a leaf from the Black Rock Desert book this August. Transformative artistic experiences need not only happen on drugs while in the desert.