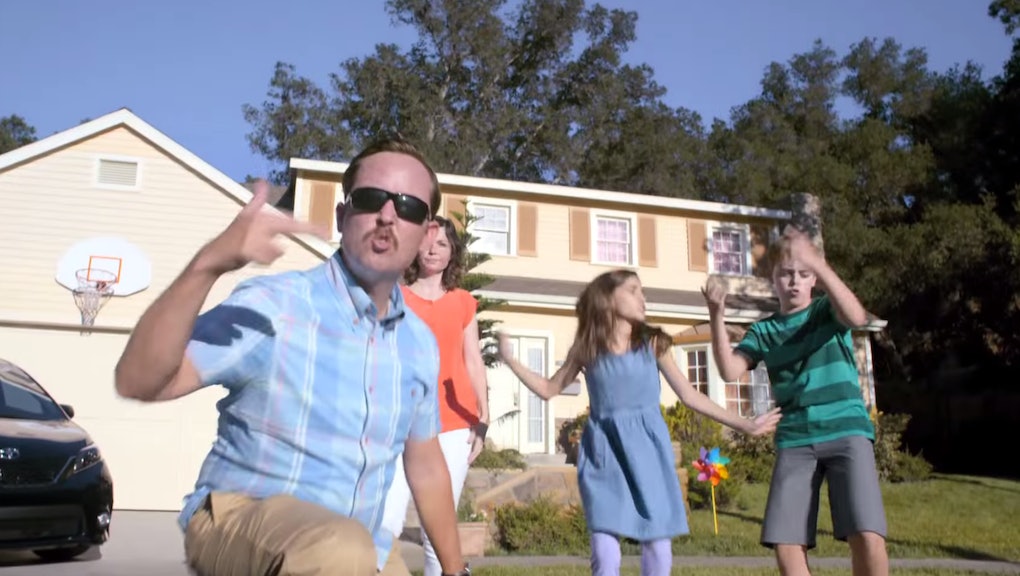 A hip-hop artist famous for telling it like "it is right now" just stooped to a new low by spitting rhymes for a ringing endorsement of cultural appropriation and the 2015 Toyota Sienna.

In the new "Swagger Wagon" commercial for the car, rapper Busta Rhymes appears as the black accessory to a white, affluent and suburban family — The Neuberts — who rap about their family life, their cars and their cribs in egregious blaccents. If you thought Iggy Azalea was bad, wait until you hear this tiny white girl rap the following in front of her suburban home, "Alright mother-fathers, this one's about the swagga' wagon. I'll wash ya mouth out with soap if you call it a mini van. That's a dirty word. Drop that beat."

And Busta is all too happy to comply.

If you close your eyes, these white children and adults speak and rap in voices that sound exactly like the Southern trap-rap style of phrasing. It's similar to what you'd hear in Beyonce's "***Flawless" or Three Six Mafia's Academy Award-winning song "Hard Out Here For A Pimp." Except it's horribly offensive and it's sole purpose is to sell vehicles.

This is essentially no different from blackface. It is a tactic employed by a massive Japanese company (with a predominantly white leadership in America). It's painful to watch Busta Rhymes contribute to sustaining a decades-long legacy of cultural theft and racist mockery against blacks and other people of color. In the advertisement, Busta Rhymes raps about the new Toyota vehicle's ability to add to the suburban family's so-called swag, all while the white people that he accompanies crank the Soulja Boy dance, crump or any other number of dance moves popularized by black artists and historically black music genres.

Not to worry, a few other African-Americans are included into the video in its latter stages, functioning as post-racial props to assuage potential guilt about what the viewers saw during the ad's first two-and-a-half minutes — which, just to review, is a litany of rhymes about being milquetoast and suburban, performed in blaccents with black idioms by white actors.

Toyota, though, seems to be under the impression that because Busta Rhymes joined in on the fun, this isn't horribly racist. Nothing could be further from the truth. The most recent, and similarly controversial example was during the 2013 Super Bowl commercial blitz, when Volkswagen made a commercial based on the song "Get Happy," in which white people in an office setting spoke with Jamaican accents and slang to encourage each other to chill out and lift their spirits — all in the name of promoting the German-made vehicles.

So before Busta Rhymes — or better yet, the Toyota corporation — decides to make a flashy commercial featuring rap and hip-hop to try to sell cars, they might consider letting the actual rappers do the rapping. Perhaps they'd be better off allowing a white, affluent and suburban family to express themselves in ways that are natural to them, not through racist accents.

Because stealing someone's voice matters. Because the white actors can strip away their blaccents and resume using their culturally-normalized dialects and tonalities without risking discrimination for the way they speak. They can jump into an accent whenever they like without the burden of the social and institutional stigma long associated with speaking in Ebonics (even though it's actually more complex than standard English) and other slang items popularized by blacks, but often scorned by whites. And they can make mocking videos like this, totally debasing the cultural significance of black forms of expression.

It's important to note that, sometimes, people of color appropriate other minority cultures as well, which reflects unchecked prejudice but doesn't come with the same legacy of white supremacy. And, it's not the case that people of color participating in "white culture" is appropriation, because whiteness is a default in American culture and is often the product of more historic appropriations.

But cultural appropriation, especially as seen in the Toyota commercial, is at best mockery and denigration of a whole racial or ethnic group's cultural output — in order to sell an environment-eating car.