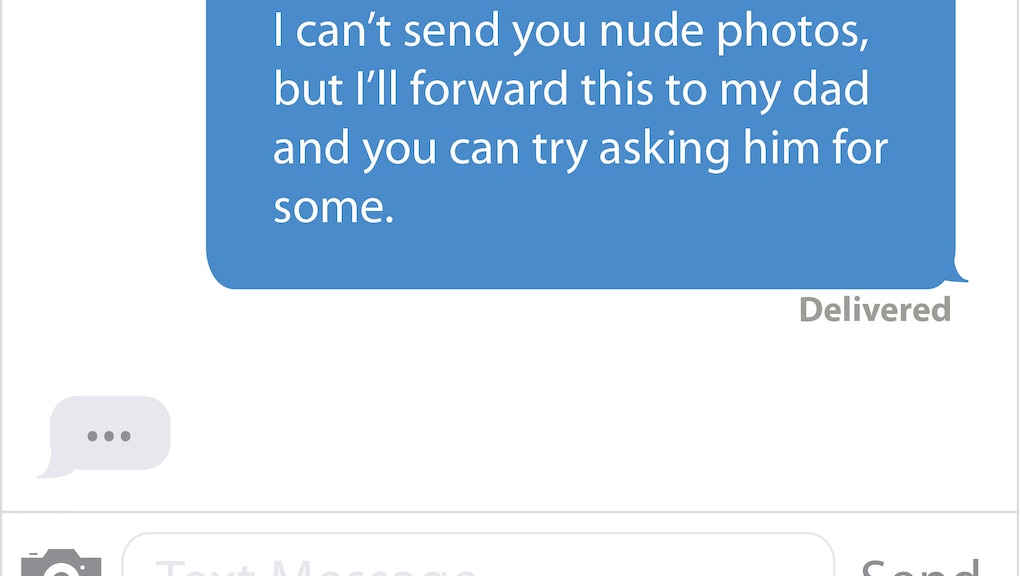 Unsolicited dick pic handling is like a Beyoncé awesome remix alert: ladies really wish there was an app for that.

If you think explicit images or texts are hard to handle now, imagine your 13-year-old self (or your niece's or your neighbor's) dealing with pictures of such unwanted junk. Being a teenager is terrifying enough without having to deal with Bobby's wanker being snap-chatted to you in the middle of 4th period algebra's class. X+Y equal... sexual harassment?

In an effort to combat this issue, Canadian police are debuting a new tool they hope will help teens deal with sexting. The Send This Instead app arms kids and teens with 57 witty responses to unwanted sexually explicit text messages.

According to TVNZ, these witty replies include things like "okay TTYL (Talk to Your Lawyer)" and "why, so you can share them with the friends you don't have?" Yahoo News reports that others include, "Sorry, just in the middle of something... Can I reject you later?" and "No, but keep taking the selfies. The cops will appreciate you making your own mugshot." Then there's my personal favorite: "I can’t send you nude photos, but I’ll forward this to my dad and you can try asking him for some."

While it might be easy to write sexting off as a form of innocuous, juvenile high jinks, research shows unsolicited sexting can quickly devolve into online harassment. Consider data from the National Campaign to Prevent Teen and Unplanned Pregnancy, which found that children as young as 13 are sending explicit pictures and videos of themselves and that, in many cases, they are doing it because one was sent to them first. Societal pressures are at the crux of this issue, with 51% of teen girls admitting that pressure from a guy lead to the sending of nude images or videos. Tellingly, "only 18% of teen boys cited pressure from female counterparts as a reason."

More concerning, while half of teenagers are currently sending or receiving explicit photos, many of those photos are being shared with someone other than the intended recipient. This type of sexting is bullying, plain and simple, and can lead to tragedy.

One particularly disturbing study from the Institute of Education, King’s College and the London School of Economics found that school girls now fear their peers more than strangers as a cause to sexual harassment because of the omnipresence of sexting requests. In a press release, study authors noted that "girls can be pestered relentlessly until they finally agree to perform sexual acts which can be recorded on mobile phones. These can then be broadcast to groups of young people leaving the devastated victim to face ridicule and abuse. Researchers found there were 'significant numbers' in circulation with one boy alone claiming to have 30."

Lead researcher Jessica Ringrose said that some of the girls being pressured to send explicit photos were as young as 11 as that some of the female subjects "were being bombarded with these messages" while they were being interviewed. "Some of them found ingenious ways to fend off the demands but still the pressures are immense and the younger girls in particular wanted help," she explained.

So although this new app may not prevent unwanted sexting, it may empower teens to break the cycle. Yahoo News reports that Inspector Scott Naylor, the manager of the OPP sex crimes unit told the AFP that "It's not going to solve sexting," but "we're just giving kids an alternative strategy to deal with it."