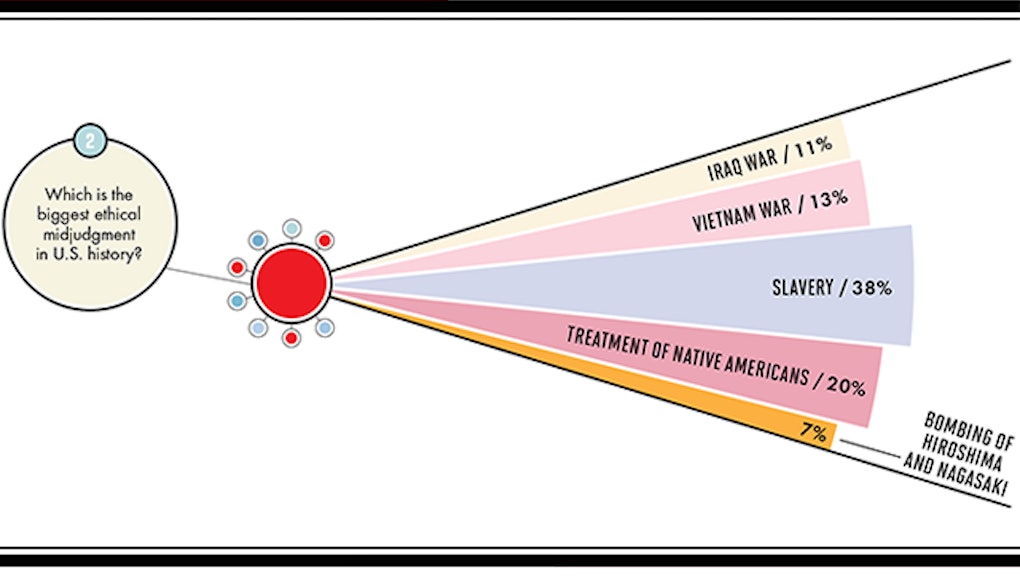 So, this happened: Vanity Fair — an actual magazine — has asked its readers to rank America's worst atrocities.

Is this helpful? Obviously. Because how can we make informed life decisions without knowing whether Native American genocide is definitively worse than the trans-Atlantic slave trade? (Fun fact: It's not, apparently.)

Image Credit: The Lodge of Sungmanitu-Isna

The atrocity question was framed as a matter of "ethical misjudgment," because oops, slavery and murder just happen sometimes.

As pictured above, the 1,017-person survey found that 38% of respondents said slavery is the worst thing America has ever done, compared with 20% for the general "treatment of Native Americans" and 13% for the Vietnam War. Runners-up include the Iraq War (11%) and the bombings of Hiroshima and Nagasaki (7%).

Why would they ask this? No idea.

What's the problem? The main issue lies with pitting these atrocities against each other as forms of moral measurement. Though the findings are somewhat interesting, such logic is too often used to delegitimize group suffering and deter efforts toward recourse.

For instance, a major part of David Frum's argument against Ta-Nehisi Coates' famous Case for Reparations includes the following:

In other words: Compensating one group for past mistreatment means everyone who's ever been mistreated must automatically be compensated in the same way. You know, because morally, this stuff was all pretty bad.

Yet drawing these simplistic moral comparisons does two things: First, it glosses over the uniquely destructive nuances of each individual crime. And second, it provides a convenient out for the parties who'd otherwise be held accountable, specifically by turning practical conversations into abstract debates.

Not to mention: Hiroshima victims would probably hate being tossed into a theoretical pissing contest with victims of the Vietnam war. This helps no one.

The takeaway: Go home, Vanity Fair. Find something useful to do.