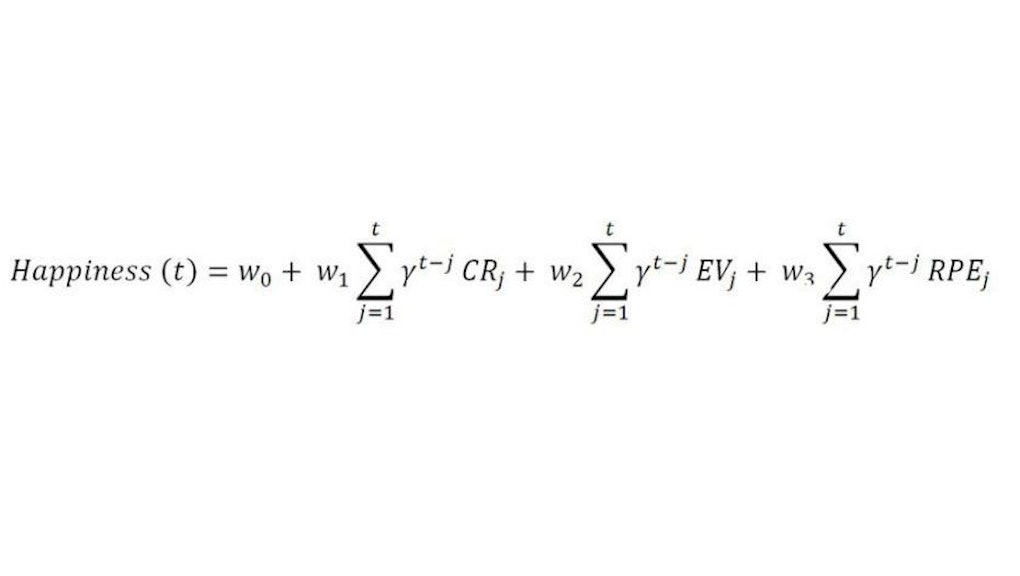 Image Credit: Proceedings of the National Academy of Sciences

We find happiness in the unexpected: While the idea that a mathematical formula could determine how happy you feel might sound ludicrous, this formula comes from a fascinating new study: People feel joy when they experience an unexpected victory, no matter how small it is.

The study, conducted by researchers at the University College London and published this week in the Proceedings of the National Academy of Sciences, found that applying this complex equation in everyday situations above can lead humans to predict periodic outbursts of joy.

Scientists found this formula by having a group of 26 volunteers play a gambling game while they monitored the activity in two regions of their brains that correspond with feelings of happiness.

The result? In simple English: happiness resulted when players did better in a game than they expected they would, regardless of the amount of money they won. And this formula can help people replicate these simple bursts of happiness in their everyday lives.

The details: The volunteers played a gambling game in which they chose between a definite reward (say, winning $5 vs. the alternative of winning nothing) and a risky one (staying even or losing $5). Every so often, they were also asked to report their level of happiness on a scale of 1 to 10. As they played, the researchers monitored their brains with an MRI.

When researchers plugged in all of their variables (from the type of gamble they took to their reaction and their happiness score), the formula worked. The math showed that volunteers felt happiest when they performed better than they thought they would.

Not convinced? Neither were the researchers, especially given the small sample size and scope of their original study. So they tried it again, this time with a volunteer base of 18,000 people. The new volunteers didn't have to come into a lab; instead they played a version of the game using a risk-reward app on their smartphones. The app has been shown to be a reliable way of studying cognitive behavior.

The research on the larger group led to the same results: When they accomplished something that ran counter to their expectations, people felt predictably elated (predictably being the key word here — scientists could tell which participants would feel happy and when, without brain scans). And happiness happened regardless of the amount of money they won. Even in cases where players won steadily more money, their happiness faded over time.

Decades of psychological research bolster the idea that humans not only feel elated by surprise, but also that how we react to any change in our lives determines our level of happiness.

In the 1970s, Harvard psychiatrist George Vaillant theorized that joy derived from how well we responded, or adapted, to the unexpected challenges in our lives. If we can find humor in difficult situations or channel our pain or anger into healthier outlets, such as new relationships or hobbies, we feel happier when compared with people who do not exhibit these adaptive behaviors.

More recent research also backs up this claim: Psychologist Daniel Gilbert has suggested that happiness is not rooted in carefully planning each step of our lives and meeting every goal we set for ourselves, but rather in finding joy in the unexpected.

The formula, then, should give us some relief. When things don't go as we anticipated, something better might be on the way.