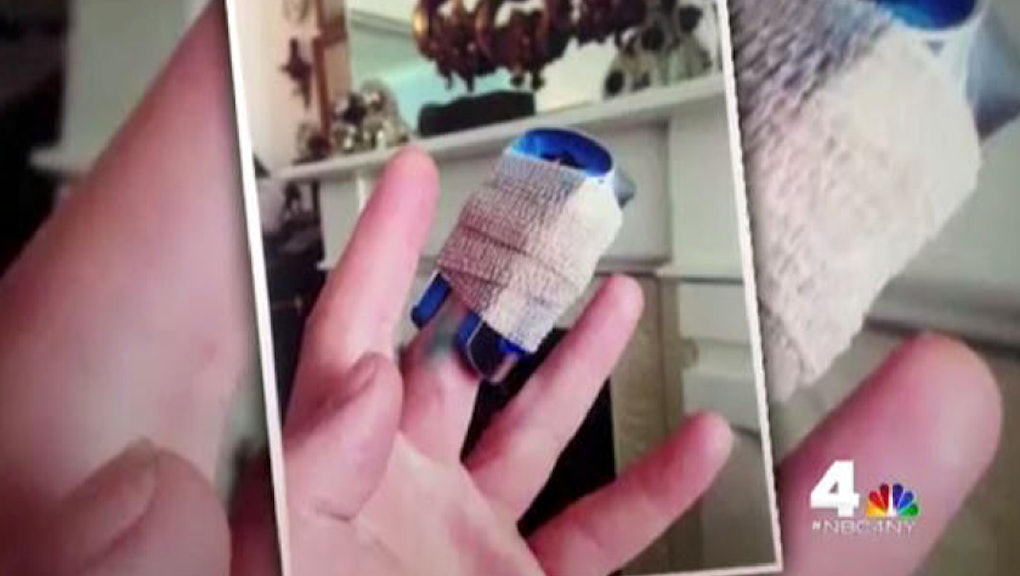 After a brisk visit in which Hanusz-Rajkowski did not see a doctor and did not receive stitches, he got a bill in the mail for $9,000. Essentially, Bayonne charged him months' worth of pay for some gauze and a tetanus shot.

- Hundreds more for a few moments of the nurse practitioner's time.

This is all after insurance.

Needless to say, Hanusz-Rajkowski is rightfully pissed. He told NBC New York that "If I severed a limb, I'd carry it to the next emergency room in the next city before I go back to this place."

Why the heck did it cost so much? For-profit medicine. Hanusz-Rajkowski's insurance company, United Healthcare, is apparently in some kind of dispute with the hospital, which was converted into a for-profit business over half a decade ago by Carepoint Health. Carepoint says the insurance company refuses to provide fair reimbursement rates, while United Health retorted that the hospital's new business model essentially encourages price-gouging.

Thanks to all the media attention after NBC picked up the story, the bill was settled with no cost to the unfortunate patient. Other patients at Bayonne will probably not be so lucky. NJ.com reports that the hospital charges 10 times more than Medicare reimbursement rates for simple procedures. Having a heart attack with complications treated at Bayonne would run you nearly $140,000, compared to $29,000-$55,000 at other regional health centers.

But this isn't isolated to New Jersey. Aurora, Colo., massacre victim Caleb Medley was stuck with a $2 million hospital bill after being shot in the eye, further proving that American healthcare billing has basically become a "giant economic scam," according to TechDirt Editor Mike Masnick.

The silver lining: Obamacare is widely expected to reduce abusive billing by providing many more Americans with insurance, imposing new transparency rules and changing the way procedures are reimbursed. These are not small changes and will take time to go into full effect. Ultimately, the Affordable Care Act will make stories like this less common and economists like Paul Krugman say it has already been very effective at slowing down soaring health care costs.

Why you should care: Even with the gigantic improvements under Obamacare, America's for-profit healthcare system is still massively unfair. Death and Taxes' Robyn Pennacchia argues that screwing people like this would be impossible under a universal healthcare system, which by the way pretty much every other rich country has. Sigh.