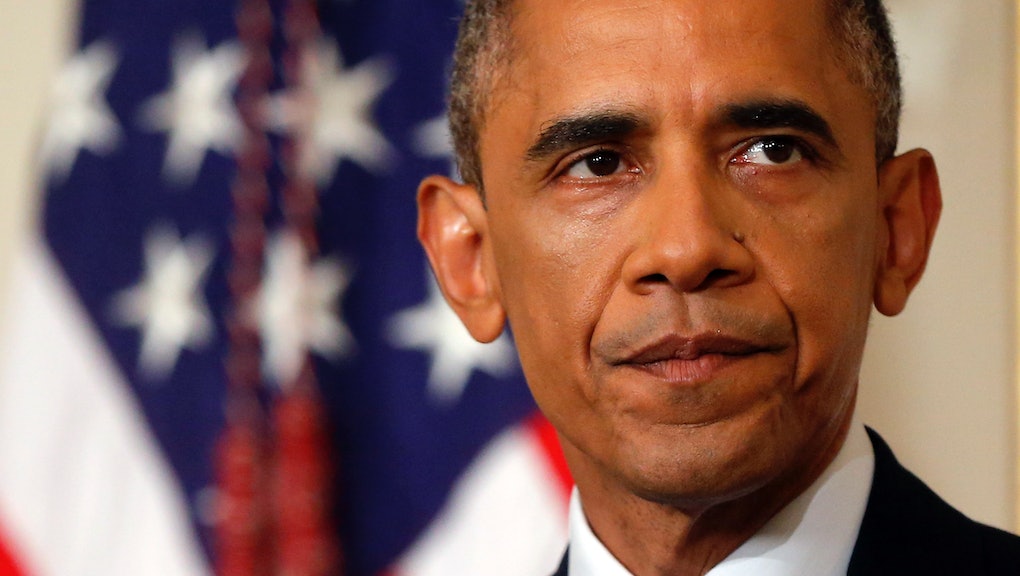 The news: In response to terrorist group and self-declared nation Islamic State's ongoing rampage throughout Iraq, President Obama has authorized the U.S. military to begin launching airstrikes against militants in the northern part of the country.

While the Huffington Post originally used the image above to criticize Obama over mass surveillance of U.S. phone records, it applies equally well to his current approach in Iraq. This marks the biggest U.S. escalation there since American ground troops left the country in 2011, a move then described as the end of the war in Iraq.

But in 2011, Obama said U.S. troops "succeeded in the mission of giving to the Iraqis their country in a way that gives them a chance for a successful future." Apparently that successful future now includes more missiles and explosions courtesy of Uncle Sam.

The background: The White House says it's taking action because the Islamic State poses a threat to the nearly 300 U.S. military "advisers" deployed to Iraq in June. At the time, the White House described those troops as necessary to "assess" the situation and evacuate civilian embassy personnel in Baghdad to the then-secure city of Erbil, Iraq's Kurdish capital. If Islamic State threatens to attack Erbil, then strikes may follow.

President Obama also said that U.S. aircraft will strike Mount Sinjar if Islamic State threatens the safety of 10,000-40,000 Yazidi Iraqis trapped there. Islamic State openly believes Yazidis are heretics that deserve to be killed or converted by force.

This situation in Iraq is admittedly very, very bad. The central government headed by Prime Minister Nouri al-Maliki has proved catastrophically incompetent in the face of widespread discontent and violent resistance. Islamic State has inflicted a series of humiliating defeats on Iraq's military, including seizing the city of Mosul and stealing vast stocks of weaponry, much of it originally provided by Americans.

According to the Council on Foreign Relations, Islamic State is a now a pseudo-state controlling "resources and territory unmatched in the history of extremist organizations," such as tanks and oil facilities.

None of this was enough to coerce the U.S. into rejoining the civil war in Iraq, which since 2011 has been their own problem. But the last straws were apparently several major Islamic State victories over Kurdish Peshmerga troops, one of the few local groups able to resist them, as well as the humanitarian crisis in Sinjar.

U.S. aircraft will also deliver humanitarian aid to refugees put under mortal threat by Islamic State, which is absolutely needed. It's food, water and medical supplies that should be dropped, not bombs.

Why you should care: Launching airstrikes will bring the U.S. back into the fray in Iraq and may be deeply unwise. While Islamic State appears very strong, there are clear signs locals are tiring of their brutal rule, and some experts believe the group is riddled with internal contradictions that could further its own undoing.

To put it lightly, the American invasion of Iraq is a touchy subject among Iraqis themselves. U.S. strikes may backfire, rallying Islamic State supporters and swelling its ranks. Backing up the central government in Baghdad with American muscle is likely to forestall desperatedly needed change. What's more, air strikes will do little to actually destroy Islamic State, which is a long-term strategic threat rather than a singular crisis.

Airstrikes are also far from the only option: The U.S. could demand regional actors like the Arab League or Turkey step in, which would help the region deal with its own problems. Since the U.S. didn't use force to stop Syria from nerve-gassing civilians, bombing Iraq now that Islamic State threatens regional energy supplies would send a signal to the Middle East that the U.S. is only willing to fight for their oil.

Finally, the pro-war crowd is beating the drum louder than ever, demanding that Obama deploy special forces and directly intervene. They were wrong in 2003 and they're wrong now.