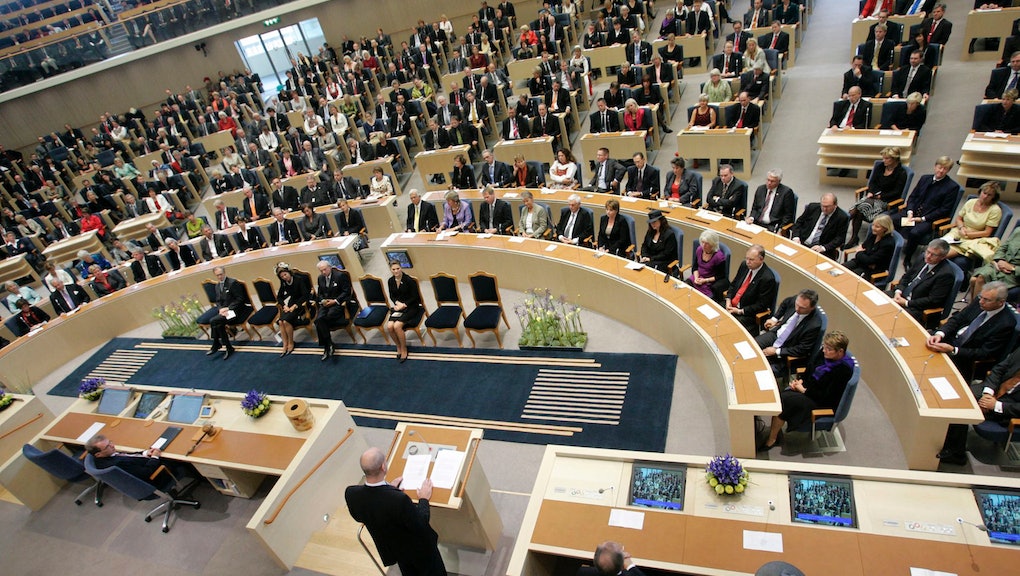 So commands Sweden, whose government aims to remove all mentions of "race" from the country's legislation by December 2015.

The Local reports "the concept of race" appears in about 20 Swedish laws. But apparently it does so erroneously, since — as Integration Minister Erik Ullenhag reportedly told Sveriges Television — "We know that different human races actually do not exist."

What? The "race doesn't exist" argument is rooted in scientific belief, but it might do more harm than good. Case in point is May 2013, when at least five Stockholm suburbs erupted in riots after police officers shot and killed a 69-year-old Portuguese immigrant in his home.

Liam McLaughlin at the New Statesman points to economic shifts as a main reason for unrest. But he's quick to indicate another pattern: Namely, that poor immigrant communities are typically hit the hardest by Swedish economic inequality.

More: Despite its reputation for being "welcoming to immigrants," 46% of Sweden's non-European immigrant community is unemployed, according to the New Statesman. To make matters worse, 23% of young people in this demographic lack good enough grades to attend vocational training programs, let alone university.

These are damning figures for a nation that graduates a higher percentage of its college students than the U.S. They also suggest, despite arguments to the contrary, that nationality, ethnicity and, by extension, race, do indeed play a role in Swedish socioeconomic inequity.

So why is the law changing? One fact is important to note: Social scientists have long painted race as a social construct with no basis in biology.

On the other hand, many geneticists refute the notion, though debate around the crudity of the term "race" complicates things. Nicolas Wade writes in TIME that "[Analysis] of genomes from around the world establishes that there is a biological basis for race" (Italics added).

He goes on to say, "An illustration of the point is the fact that with mixed race populations … geneticists can now track along an individual's genome, and assign each segment to an African or European ancestor, an exercise that would be impossible if race did not have some basis in biological reality" (Italics added).

Put simply, the problem was never truly that there's "no difference" between races. It's that people have taken these differences to justify inequality.

However: Swedish officials disagree with the science. Minister Ullenhag explains to the Local that notions of race "in Sweden" actually go back to the idea of "race biology," a dubious field pioneered by the Swedish National Institute for Race Biology, the world's first academic institution for studying racial difference established in 1922.

"Legislation should not include the word race, if we argue that there are not actually races," Minister Ullenhag told the Local. "We also know that the fundamental grounds of racism are based on the belief that there are different races."

But, to be clear: Ullenhag and his allies don't want to eliminate the concept of difference completely — just change the language a bit. In countries that have tried this experiment, like Austria and Finland, "race" in law is replaced with broader terms like "ethnic affiliation."

Why is this dangerous? For one, it prevents anti-racist groups from combating racial discrimination in court — since, you know, "race" doesn't technically exist.

Zakaria Zouhir of the National Afro-Swedish Association concurs that this is a serious problem: "This path worries me," he reportedly told Sveriges Television. "It's just sweeping it under the blue and yellow rug and pretending there is no racism in society."

The measure will be decided Dec. 7 of next year, but in the long term, eliminating the idea of "race" from law is a surefire way to undercut anti-racism. That's a problem nobody needs, including Sweden.