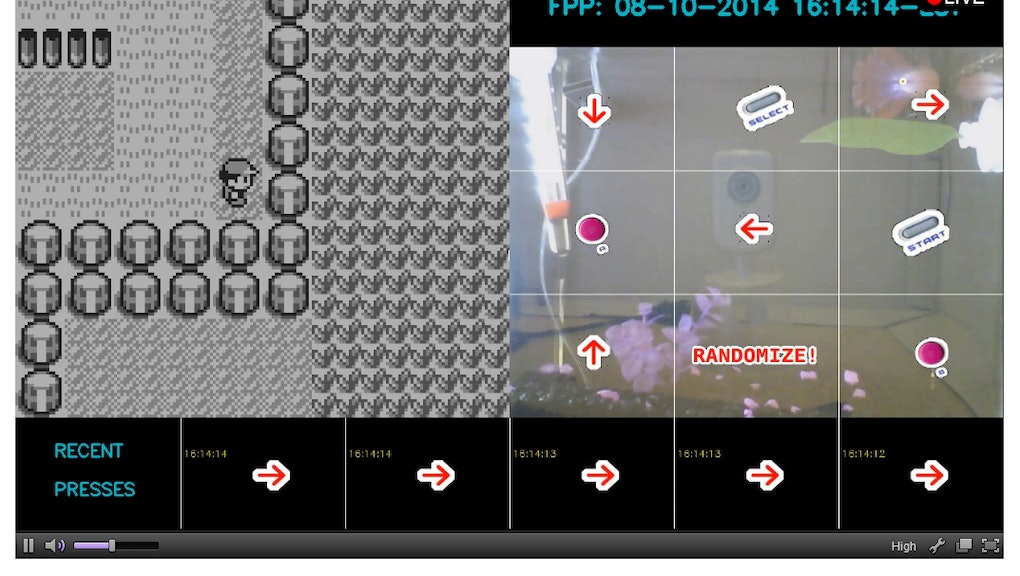 Go home Internet, you're drunk: Millions of web users have turned out on live-stream website Twitch.tv to watch a fish play Pokemon.

The Siamese fighting fish, named Grayson, is controlling the main character in a game of Pokemon via a motion sensor hooked up to button controls on a Gameboy emulator. The result has been streamed to the Internet for all to see. The BBC reported that as of Friday, the fish had attracted some 1.175 million viewers: That number skyrocketed to more than 3.4 million views by the weekend's end. Meanwhile, Reddit users have started a campaign to improve Grayson's living conditions.

You can watch the little guy endlessly pursue his objective below:

Why is this happening? This is actually the escalation of a bizarre trend. In February, another experiment,called "Twitch plays Pokemon," allowed thousands of people to argue their way through Pokemon attracted somewhere around 36 million people. That play-through was completed in 16 days and inspired countless memes.

With a big fanbase and simple controls easily directed from afar, Pokemon is ideal for strange experimental playthroughs. It's also impossible to lose, since defeat just sees the player character reawaken at a local hospital. In theory, the fish or his successors will eventually beat Pokemon no matter what. It's basically the Internet version of a thousand monkeys at a thousand typewriters, except instead of Shakespeare, the end result is a whole bunch of wasted time.

While a Mountain Dew-crazed mind was able to navigate its way through the game rather efficiently, the fish has unfortunately not. Days of playing have resulted in pretty much zero progress and it's reasonable to assume that it could take Grayson hundreds of years to navigate throughout the entire thing.

Fans on the /r/fishplayspokemon subreddit have proposed various improvements to accelerate the pace as well as strange theories (like every NPC is also controlled by a fish).

What it means: Twitch has not only broken into the top 15 web applications by usage, it has also accepted a rumored $1 billion acquisition offer from Google. Generously assuming Grayson provides 1% of Twitch's traffic over the next year, he may be worth millions in theoretical Internet dollars.

This seems like the logical endpoint of the Internet. The next time some nerd starts spouting off about interconnectedness and technology, you can smugly remind them about the time hundreds of thousands of man-hours were spent watching a fish doing nothing. But your point might be lost in all the awesomeness.