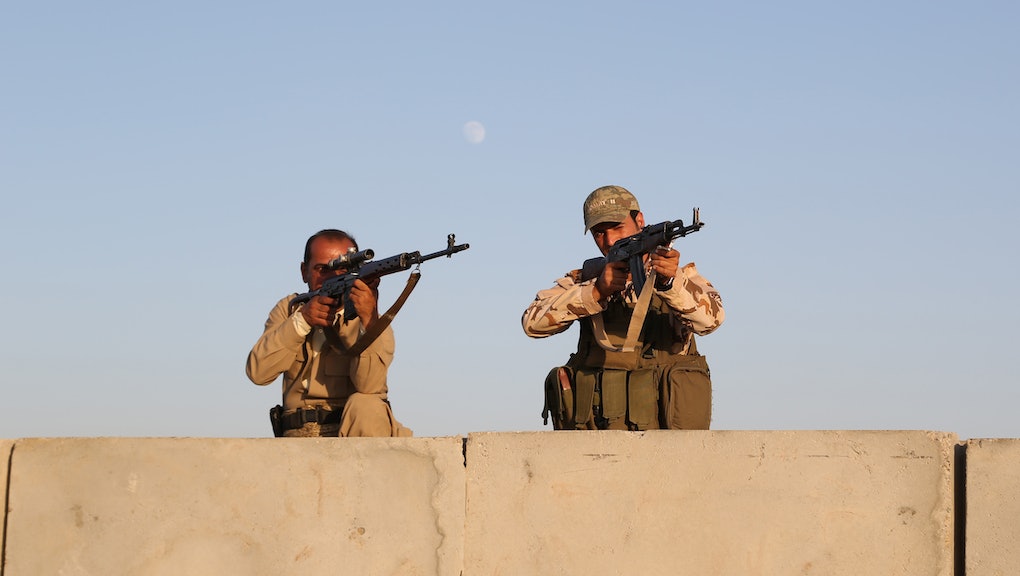 The Infuriating Hypocrisy of President Obama's Decision to Bomb Iraq

We're bombing our own equipment. President Obama recently approved limited military strikes against Islamic State fighters targeting thousands of refugees in Iraq's northern Sinjar province and the Kurdish capitol of Erbil. American pilots and drones have already destroyed small ground targets — mainly artillary, morter positions, and other pieces of equipment — and may be preparing to step it up in the coming weeks.

Unfortunately, a lot of the shiny new military hardware the Islamic State have been parading around Iraq — including artillery and rocket platforms, tanks and small arms — was originally purchased by Uncle Sam, as Vox points out. Prime Minister Nouri al-Maliki's Shia-dominated central government's incompetence and repeated failures in Baghdad have ensured that what should be secure armories and bases have fallen into IS fighters' hands, along with huge stores of equipment and munitions.

Ultimately, that means the whopping several trillion dollars two U.S. administrations poured into Iraq is coming back to bite both Iraqis and Americans in the ass. Former American official in Iraq Ali Khedery told the New York Times that IS "is fighting with hundreds of millions of dollars of U.S. military equipment seized from the Iraqi Army who abandoned it." Some of it is pretty hardcore: IS troops recently captured at least 50 M198 Howitzers, weapons capable of pummeling cities from 20 miles away. Other seizures include 4,000 PKC machine guns and 1,500 armored Humvees.

Meanwhile: Allied Kurdish peshmerga, one of the only regional groups who have proven capable of winning the battle against Islamic State fighters, are mainly fighting with obsolete Soviet-era equipment. They face jihadist rebels who command equipment and weaponry rivaling a modern army. A growing number of former Hussein-era military officers and soldiers joining the rebellion has ensured the group's military is capable of using it on the battlefield.

The failures of previous efforts in Iraq still haunt the current crisis. Iraq's economy is a wreck, while al-Maliki has so alienated the Sunni minority that Islamic State has united over 40 different armed groups to defeat the Iraqi government. Despite this, he is still seeking a third term even as his coalition begins to fracture and an increased military presence in Baghdad has brought rumors of an imminent coup. Outside small zones around Baghdad and other government-held cities, conditions range from relative anarchy to brutal rule by the Islamic State.

Why you should care: Countless billions of American military funding couldn't prevent Iraq's total disintegration and no amount of weaponry will bring order to its countryside. U.S.-provided arms and ammo are still playing a critical role in the civil war, but mainly for the side that Americans hope won't win.

Since re-entering Iraq is more or less out of the question, the U.S. bombing campaign will probably be limited to breaking the Islamic State's momentum. This will do little to remedy Iraq's long-term political problems and further enrage the rebels, while maybe liquidating a tiny percentage of the U.S. arms already handed to IS on a silver platter.

No wonder Iraqis aren't very happy about the way we handled their country: The U.S. really made a mess of it.