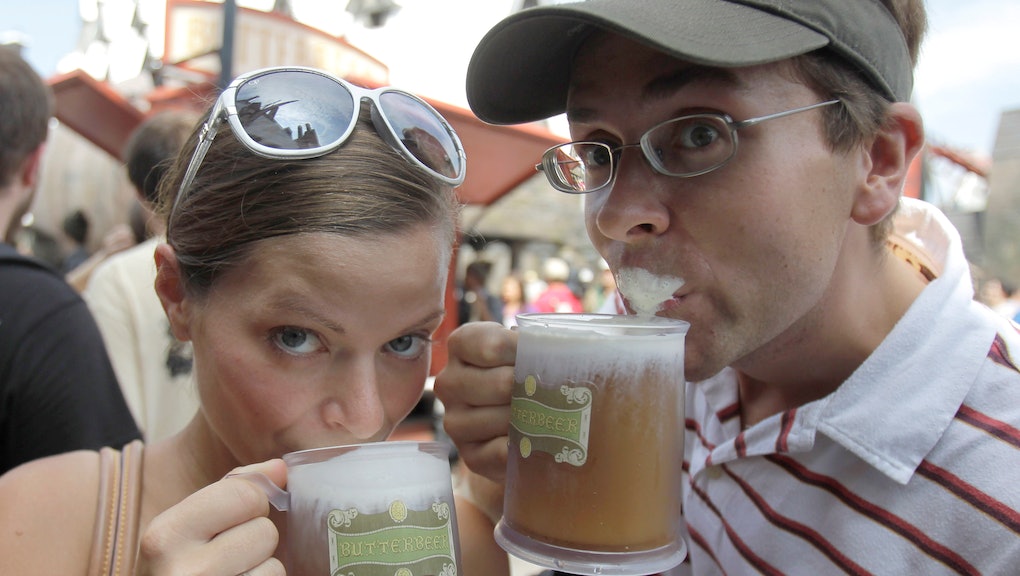 The Simple Way to Make the Mysterious Butterbeer from 'Harry Potter'

It's the best-kept secret in the Muggle world: What is the mysterious recipe for butterbeer? The frothy drink is a culinary staple throughout the Harry Potter series, served from Hogsmeade to Diagon Alley. When Universal Studios built the Wizarding World of Harry Potter, the massively popular theme park in Orlando, they decided butterbeer would be a key component. They also decided that the recipe would be a closely guarded secret.

Steven Jayson, the corporate executive chef for Universal Parks and Resorts, is the man behind bringing the creamy drink from J.K. Rowling's imagination to real life. Jayson began working on the recipe in 2008, discussing flavors with Rowling herself. According to the Huffington Post, he worked on perfecting the recipe for three years. They both had specifications: Rowling wanted it made with real sugar instead of corn syrup, while Jayson couldn't use dairy products (including butter) or (sadly) alcohol.

Even under these conditions, he created a butterbeer that Rowling loved. At the park's grand opening in 2012, Jayson explained how, after over a dozen recipe attempts, he landed on the perfect recipe. When Rowling tasted what we now know as butterbeer, she reportedly smiled and said, "Yes, Chef. That's it."

The drink consists of two layers, a liquid on the bottom and a cream topping, like a root beer float. Unfortunately for the millions of Potter fans around the world, the official butterbeer is only available at the Wizarding World park, the one place that serves Jayson's original recipe. If you want to try smuggling out a glass, beware: Before you get outside the gates, the layers mix — like the breaking of a protective charm.

The Wizarding World of Harry Potter has kept the butterbeer recipe under strict lock and key, more protectively guarded than SpongeBob's Krabby Patty formula. Of course, this secret is about more than creating an air of magical mystery. Keeping the true recipe secret and only selling it in one place is great for the park, which reaps scores of profits from just the drink. It's marketing genius.

But that doesn't mean people haven't attempted to create their own butterbeer. Without the official recipe, Muggles are casting their own spells to get a taste without having to travel to Orlando. The unofficial mixtures range from simple, like taking root beer or cream soda and throwing some marshmallow fluff on top, to chemically complex, like mixing sodas and making cream from scratch.

There is also the option of getting a butterbeer at Starbucks. All the necessary ingredients are right behind the counter; you just have to know what to ask for. Instead of asking for a "butterbeer," tell the barista the ingredients to put together. Even that is a seasonal offer, though: You can only get a Starbucks butterbeer during the Christmas season, when they have toffee nut syrup.

Then there's always the option to make your butterbeer at home.

Try it out yourself with this recipe from Bakingdom (makes six servings):

For the butterbeer layer:

For the cream layer:

Set out six 16-ounce glasses. Place 1/2 teaspoon of imitation butter (or 1 teaspoon clarified butter) in each glass. Pour 12 ounces of cream soda into each glass, over the butter. Lightly stir, if necessary.

In a large bowl, or the bowl of a standing mixer, whip the heavy cream on medium high speed for 3-4 minutes until it starts to thicken. Add the sugar and continue whipping until very soft peaks begin to form, another 3-4 minutes (if you need to whip more or less, then be sure to do so; the times can vary quite a bit based on environment). Stir in the vanilla and imitation butter (or clarified butter), then whip for another 30 seconds or so, until soft peaks form.

Spoon a generous portion of foam on top of each glass of butterbeer, mixing gently, if desired (or spoon the foam into the bottom of the glass and pour the butterbeer over the top). Serve immediately.