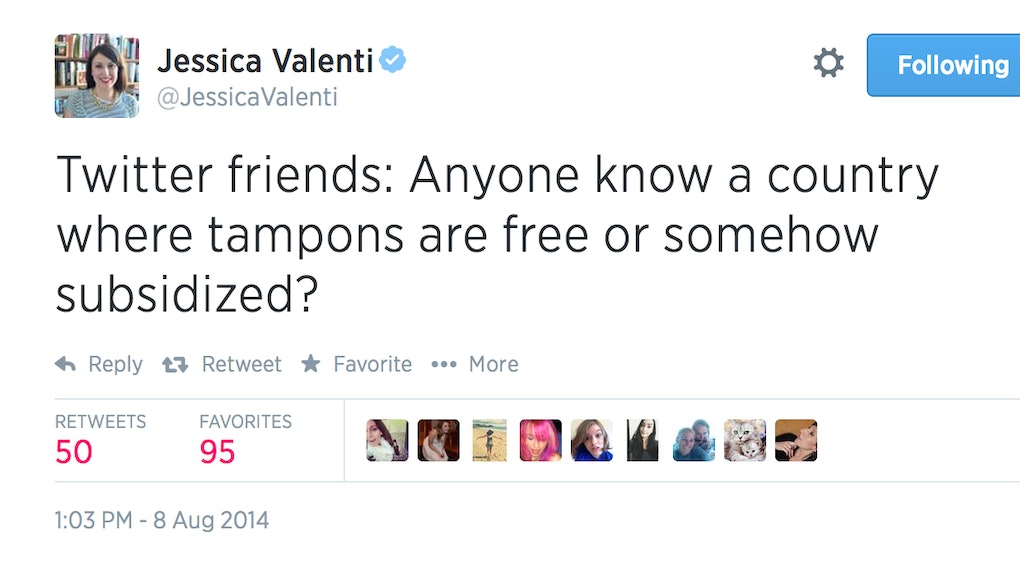 A Writer Asked Her Followers About Tampons. The Responses Are Everything Wrong With the Internet.

It's common for journalists to use social media to crowdsource information. But increasingly, what appear to be innocuous questions are incurring the disgusting commentary once relegated to the darker corners of the blogosphere. Guardian journalist and Feministing founder Jessica Valenti is no stranger to this breed of unsolicited vitriol. However, even this veteran feminist was taken aback by the response to a question posted over the weekend, asking followers about tampon subsidies in different countries.

While some offered helpful suggestions, an astonishing number went on the attack, calling her a "cunt," recommending a hysterectomy and telling her to "stick a few fingers in your you-know-what to stem the bleeding."

Shocked and aghast at all the vicious hate directed at her, Valenti compiled some of the most objectionable reactions on Storify.

The villification and hounding of female writers online is nothing new, of course. The Guardian's Chris Elliott recently wrote a story on the phenomenon, noting that his website had recorded a significant increase in the abuse spewed by commenters on articles ranging from body hair to domestic violence to single parenting.

Far from worrying about crossing any line, commenters and social media users seem to feel that there is no line, leaving no insult unsaid and no threat unuttered. Anita Sarkeesian, founder of Feminist Frequency, a blog about sexism in the gaming industry, said she "was surprised by the level of vicious and misogynist hate I received, which included a loosely organized campaign of death threats, rape threats and attempts to collect and publicly distribute personal information, such as my home address and phone number."

In January, fellow feminist writer Amanda Hess wrote about her own experiences dealing with a Twitter user who repeatedly threatened to rape and kill her and cut off her head.

"None of this makes me exceptional," noted Hess, who received her first rape threat back in 2009. "It just makes me a woman with an Internet connection."

Let's not forget Caroline Criado-Perez, the activist who successfully campaigned to have Jane Austen's face on a British bank note last year, only to receive a deluge of horrifically graphic threats that, at their peak, were being sent via Twitter at the rate of one per minute, "with men discussing how they will rape me together, which parts of my body will be penetrated and exactly how they are going to kill me."

This time, Valenti did not receive any death threats. But next time, who knows? We live in a society where this behavior can arise over a campaign lobbying to put female faces on national currency or a query over tampon accessibility. The question of whether women will ever truly feel safe online remains an essential one for our generation and, perhaps, for the future of a free Internet.

This July, the Supreme Court heard arguments in Elonis v. United States, a case that deals with online threats disseminated through social media sites like Twitter and Facebook. The defendant has painted the case as a defense of constitutionally protected free speech rights, but the outcome could have crucial consequences in cases like Hess' and Criado-Perez's.

Ultimately, Valenti went ahead and wrote her artcile about tampons, which was shared thousands of times and racked up hundreds of comments. She published it on Monday, quietly proving to Twitter trolls everywhere that their hatred wasn't going to stop her from doing her job.