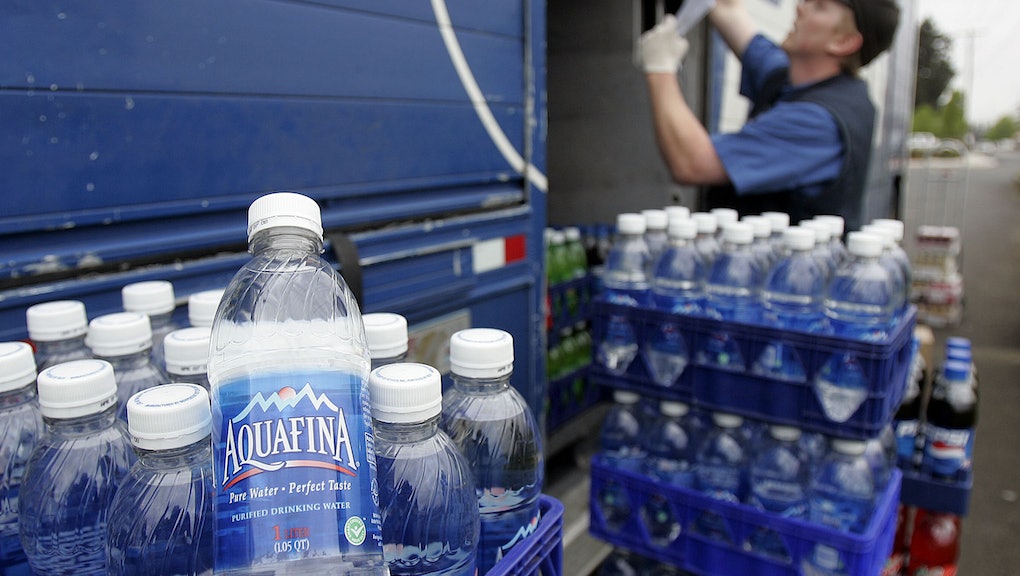 If you're reading this, chances are very high that your home has at least one — and maybe more! — magic appliance that produces clean water suitable for drinking. That's one reason to avoid paying for bottled water.

Another reason? There's a good chance the water you're buying at the supermarket was bottled in California, a state currently enduring a severe drought.

Mother Jones found out where some of the most popular bottled water brands get their water, and overlaid the points on a map of drought zones. Take a look:

Drought conditions: California cities like Santa Cruz and Pleasanton have already implemented strict rationing programs, according to SFGate. In Santa Cruz, anyone who uses more than 249 gallons of water a day is subject to a fine 10 times greater thannormal penalties. In Pleasanton, residents and businesses need to cut water consumption by 25% compared to last year, with violators looking at a doubled or even tripled water bill.

The entire state is actually urging residents to cut water use by 20%, though it's a voluntary request. In true California fashion, they've recruited celebrities like Conan O'Brien and Lady Gaga to help spread the word.

Why get water there? In theory, big companies could just bottle water someplace that's not in the midst of a crippling drought. In practice, things aren't quite so simple.

As Mother Jones points out, many companies have longstanding relationships with the state and the sources from which they draw their water. (Arrowhead Water, for instance, has been around for 120 years.) They're not about to drag their whole operation to the other side of the country.

There's also the little detail that California's water regulations basically boil down to "dibs." The first company that drills and finds a water source gets to keep it. Bad droughts can lead to more water drilling, as companies scramble to keep up with a dwindling supply.

So if you're about to go for a run or craving some tasteless elixir of life, just turn on the tap. It's where 55% of bottled water in the U.S. comes from anyway, and you're doing thirsty California a tiny favor.