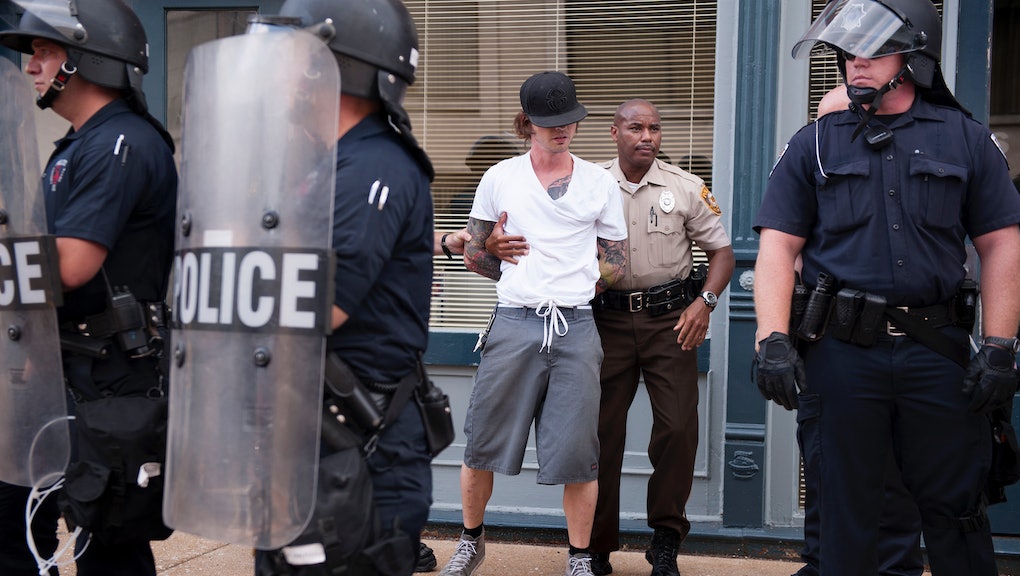 Here's the Disturbing Way St. Louis Residents Are Responding to the Unrest in Ferguson

A surge in racial tension in St. Louis has led to something very concerning — residents are stockpiling firearms.

One local gun store owner told the St. Louis Business Journal that business spiked 50%. This comes after riots and accusations of police brutality this week rocked the St. Louis suburb of Ferguson after 18-year-old black teenager Michael Brown was shot to death by local police under disputed circumstances

"People are hunkering down because those events are taking place too close to their own home ... in some cases, a half a mile away," the owner said. "Lots of people are afraid." Assding that people are purchasing "variety of handguns, shotguns and AR-15s" for home defense.

This isn't helping. More guns won't relieve racial and class tensions in Ferguson — they merely increase the risk of someone firing another shot that re-ignites the rioting.

Even some conservatives admit rushing to arm up is virtually never a good idea. After the Newtown shootings, the National Review's Clayton E. Cramer wrote that a spike in "panic gun buying" increased the risk that "something stupid or tragic" would happen since buyers were less likely to think through the decision.

There are also hard numbers to back up the concerns. As Mother Jones' Dave Gilson observes, previous studies have demonstrated armed people are 44% more likely to make inappropriate gestures at other drivers and nearly five times more likely to be convicted for threatening someone with a firearm. Texas A&M researchers have linked state Stand Your Ground laws to approximately 8% increases in homicide rates.

Psychology Today's Dr. Brad Bushman argues there is a repeatedly demonstrable "weapons effect," wherein gun owners are more likely to behave aggressively. Meanwhile, just one of these firearms needs to go off in disputed circumstances for things to get ugly again.

It probably won't protect the buyers, either: One 2009 study in the American Journal of Public Health found that carrying a gun dramatically increases the odds of an assault victim being shot, and resistance actually increased the odds of suffering a gunshot wound. Another study presented one sample of self-reported defensive gun uses to judges, who determined at least 50% of them were illegal. A 1998 study found that guns kept at home are much more likely to be used for murder and suicide or cause accidental shootings than home defense.

The presence of firearms made things worse during the Los Angeles riots of 1992, with 22 of 53 riot-related homicides and accidents still unsolved.

Short term solution, long term problems: When the panic dies down, all those guns will still be floating around in St. Louis homes. Gilson notes that firearms ownership is tied to "higher risks of homicide, suicide, and accidental death." Even if no one gets shot now, the statistics are pretty clear that Ferguson's new guns are likely to cause unnecessary injury eventually