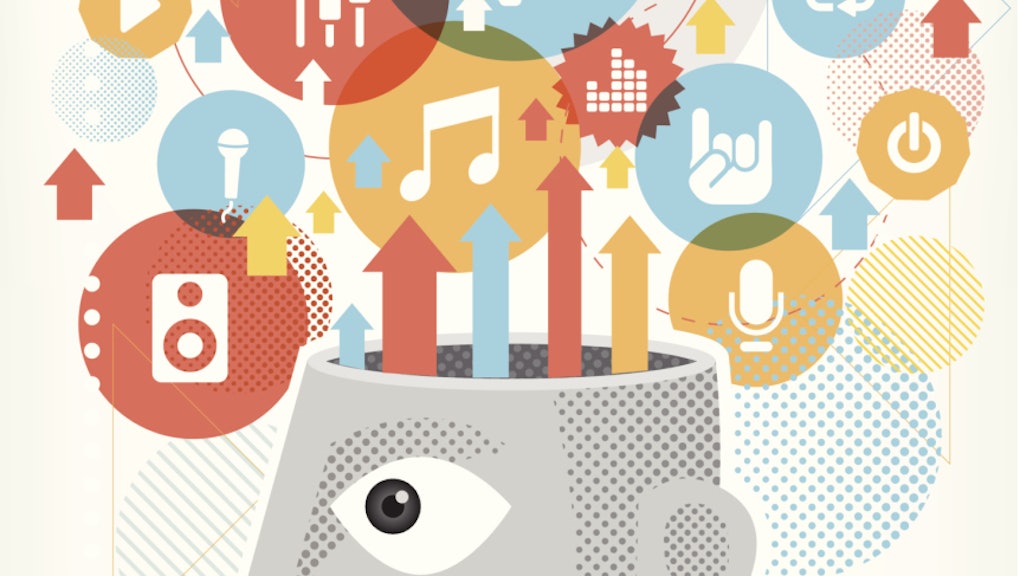 Science Shows How Musicians' Brains Are Different From Everybody Elses'

Anyone who spent hours of their young life practicing fingerings and drilling scales understands that the tedium is real. Thankfully though, new scientific research has concluded without a shadow of a doubt that all that time and energy was not wasted: Learning to play an instrument is one of the most effective ways to improve the cognitive powers of the mind. You and everyone else who learned to play an instrument as a child is smarter now because of it.

TED Ed recently released the above video detailing some of most cutting edge research on the cognitive benefits you gain just by learning an instrument. Their conclusion: Playing an instrument is exactly like a full brain workout.

The newest research on music and the brain has revealed an amazing connection with memory. Music-learning offers a huge boost to one's memory faculties. Trained musicians can create, encode and retrieve memories more rapidly and accurately than non-musicians, showing special improvement in verbal memory.

In fact, children with one to five years of musical training were able to remember 20% more vocabulary words read to them off a list than children without such training. That's especially compelling because highly developed verbal memory skills have numerous applications in non-musical contexts, such as helping students learn and remember more content from speeches and lectures. Musicians who began their training as children have also been shown to learn new languages more quickly.

And, unlike a stint at the gym, the mental gains you make by practicing an instrument don't disappear easily. Neuroscientists have observed musicians' brains while they play hooked to EEGs and seen vibrant activity in the visual cortex, as well as the auditory and motor cortices of the brain. A focused regimen of musical practice can cause permanent changes in these neurological structures, which can help people to perform numerous extra-musical tasks more quickly and efficiently for a lifetime. Some combination of the visual benefits and the motor benefits led to Victor Wooten choosing this amazing shirt while playing this incredible cover of "Amazing Grace."

Music-making engages both halves of the brain equally. By stimulating the left brain, which is the more mathematical, calculating and syntactic hemisphere, and the right, which is the more creative, musicians build a strong corpus callosum, which acts as a neural bridge between the two hemispheres. Musicians who begin their training around 7 years old have a significantly larger corpus callosum than others without the same training. That means that the two halves of musicians'brains can communicate with one another more quickly and along more diverse routes across their expanded corpus callosum. As a result, musicians are more likely to be inventive problem-solvers.

All that plays into the strengthening of the brain's executive functions, including the ability to strategize, retain information, regulate behavior, solve problems and adjust plans to changing mental demands. The results of one such study on the connections between music training and executive function found increased activity in the supplementary motor area and prefrontal cortex of musicians’ brains, two areas that are often seriously deficient in people suffering from executive function disorders, such as ADHD.

Musical training can therefore be a huge therapeutic tool to helping adults and children  manage and overcome their symptoms.

It's all remarkable, but the most incredible aspect of all of these studies is the exclusivity of these cognitive benefits to music. No other art form, hobby or activity can produce the same level of lasting neurological benefits as music. And these benefits are never out of reach. Sustaining musical activity into adulthood, or picking up an instrument for the first time, can do wonders to stave off the effects of aging by slowing cognitive decline, decreasing the risk of dementia and improving working memory and motor control.

Think about all that when you're burrowing into the couch to binge watch Netflix and instead go dig that keyboard out from your closet. Your brain will return the favor somewhere down the line.