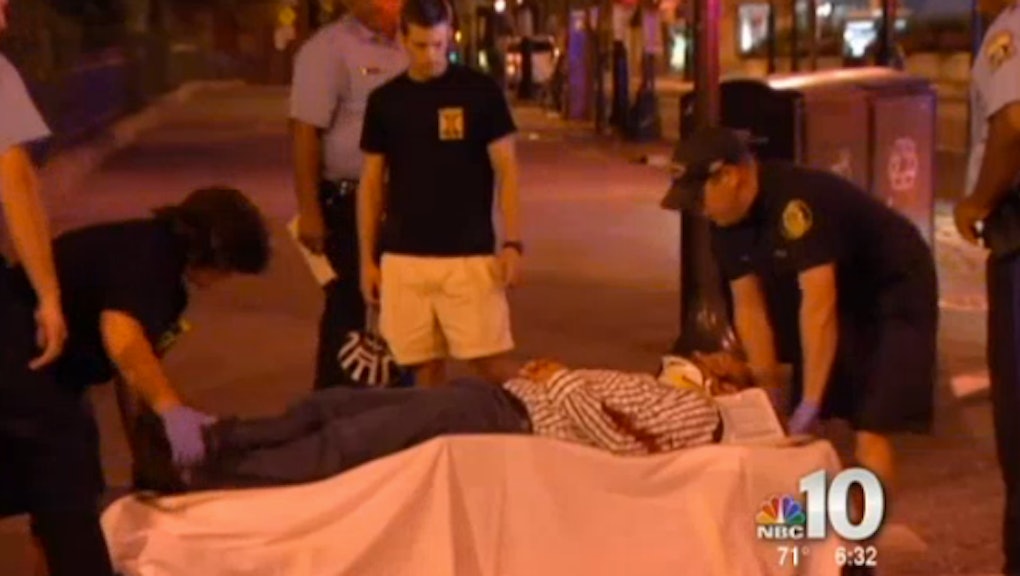 The news: A group of catcallers in Philadelphia recently found a new target for their brutality, and it wasn't women they stopped to harass.

Early last Saturday morning, a 39-year-old man walking through Rittenhouse Square, an affluent part of the city, attempted to intervene after he saw a group of men in a car harassing a group of women. The man came to the victim's defense, telling the men, "Hey, watch what you're saying," Philadelphia Police Captain George Fuchs told NBC Philadelphia.

In response, one of the men jumped out of the car and punched the 39-year-old in the head. The unnamed man then fell backwards and hit his head on the pavement. He's currently in stable condition, but as Captain Fuchs told NBC Philadelphia, "This is a tragic, tragic story. Here's a guy trying to stick up for these girls and he gets victimized."

He was trying to do something admirable. Catcalling is an enormous, disgusting problem for people everywhere, but it's particularly bad for women. Anyone who's ever been harassed on the street knows it’s not a compliment. As Mic's Liz Plank writes, "the victim feels ashamed, belittled or dominated." This man was simply trying to do his part in stopping it.

But this attack adds a new dimension of fear. This assault proves that some people will stop at nothing to intimidate and degrade women, even when someone attempts to intervene.

Men can be some of the most powerful champions in the fight to stop street harassment, but incidents like this may mean that they will be less likely to help a woman in need. Victims of harassment, then, may find themselves even more alone.

We need to make a change. We certainly didn't need another reminder that catcalling is heinous, but perhaps this will serve as a much-needed wake-up call -- street harassment is pervasive, harmful and demeaning. The danger lurking beneath the surface is extraordinarily real, even in places like Rittenhouse Square, which is designed with safeguards in mind.

It’s time that people -- men and women alike -- start standing up against this kind of behavior. If people choose not to get involved, the problem will only continue. By outnumbering the bad eggs, perhaps we can start to change things for good.