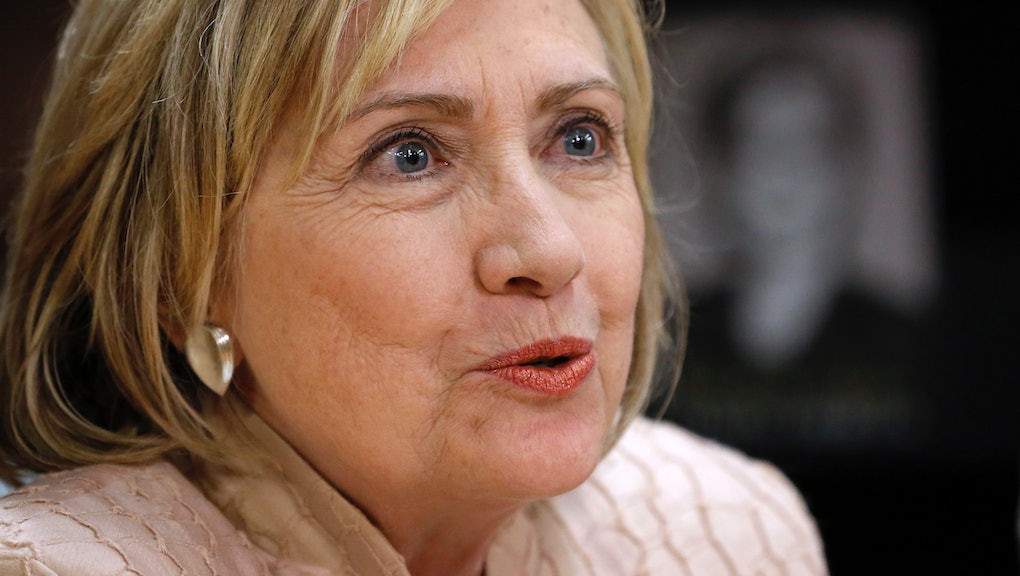 One Quote Shows Why Hillary Clinton Still Has an Authenticity Problem

Long-simmering tensions between Clinton and the liberal base of the Democratic Party spilled into public view this week, after Clinton gave a long interview to the Atlantic's Jeffrey Goldberg criticizing the Obama administration's policy on arming Syrian rebels. The dust-up revealed the fine line the former secretary of state is trying to walk between avoiding taking on President Obama directly and distancing herself from an unpopular president, as well as dredging up some old suspicions that Obama allies have long held about her authenticity as a candidate.

This quote from an unnamed Clinton supporter to Politico perfectly captures that dynamic:

Another [Clinton ally] described [the interview] as "a trial balloon for the authentic Hillary. And if the Democrats won't accept that, then fine — maybe she won't run."

A "trial balloon" is political-speak for testing the waters, essentially "floating" a preliminary idea or message in order to gauge the public's reaction. The idea that Clinton would have to workshop being "authentic" instead of just, you know, being authentic is the sort of calculation that causes her critics to doubt her trustworthiness.

Furthermore, the suggestion by this supporter that Clinton should refuse (refuse!) to run if liberals dared balk at this calculated authenticity is remarkably patronizing. Indeed, as Politico notes, "If anything, the overall flap has illustrated Clinton's challenge in being viewed as authentic. The broad assumption among political elites was that, in making the comments to the Atlantic, Clinton, whose calculated approach to politics bedeviled her in 2008, was making a deliberate, quick pivot away from a president whose poll numbers are sinking."

Politicians are calculating and manipulative by nature, of course, but the degree to which voters choose to ignore these inconsistencies matters. Ezra Klein at Vox puts it best:

Political campaigns are decided not just by what candidates say but by which of their statements supporters believe to be true. One advantage Obama had in the Democratic primary was that even when he rhetorically moved towards the middle, his liberal base didn't really buy it; his repeated assertions that he opposed gay marriage were never taken very seriously by his supporters, for instance.

It may well be the case that Clinton's remarks to Goldberg reflect her genuinely held beliefs, as others have noted. But the fact that even an authentic moment is immediately seen by liberals as evidence of political maneuvering says something about the level of distrust lying just below the surface. If Clinton's supporters are fueling this perception, it certainly doesn't help her case.