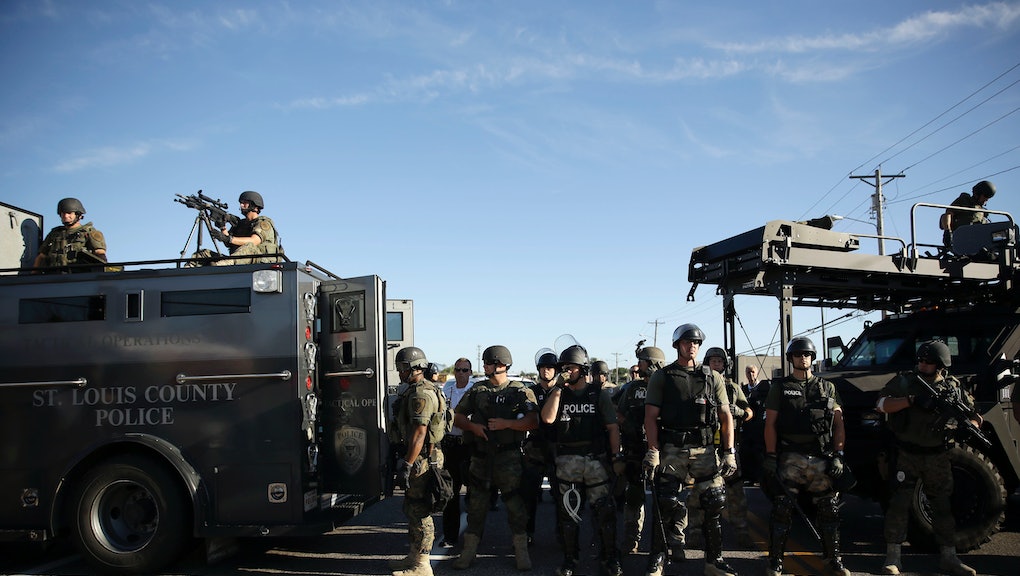 This Is What Happens When The Police Become The Military

The news: Civil unrest in response to the shooting death of unarmed black teenager Michael Brown in Ferguson, Mo., has received the lion's share of media coverage. But as protests continue, the authorities' response has increasingly looked less like police action and more like a crackdown in a war zone.

Here's how Lowery described his experience:

Here's the one that really hits home:

Politico further reports that Reilly's head was purposefully slammed against the glass door of the McDonald's, after which he received a sarcastic apology.

According to a firsthand account on the WaPo website, Lowery told one SWAT team member that the story would break on the first page of the paper — to which the officer responded, "Yeah, well, you're going to be in my jail cell tonight."

Tweets from Los Angeles Times reporter Matt Pearce seem to demonstrate that Ferguson police commanders were no longer in full control of their force:

This was what happened to two reporters from seriously established media organizations — had Lowery and Reilly been everyday citizens, they'd likely still be in custody simply for exercising their right to film police in public.

Meanwhile: Riots and protests continued in parts of Ferguson on Wednesday night, but heavy-handed police tactics are quickly overshadowing the violence that spurred them. The name of Brown's killer has not been released to the public, while officers in armored vehicles have fired tear gas at protesters and rioters alike. An Al Jazeera America crew reports that they were engulfed in tear gas, while locals told them authorities had opened fire with rubber bullets.

Locals have reported that police are pointing guns at them without provocation and dispersing media teams as well.

The Daily Banter's Oliver Willis writes that he believes "the vast majority of officers are good men and women who follow the law ... But not Wednesday night, in Ferguson. They went too far, and brought shame to America." Unfortunately, this isn't an exception: USA Today's David Mastio and Kelsey Rupp tie police excesses in Ferguson to the hundreds of millions of dollars in surplus war gear the federal government hands out to law enforcement annually. If the United States ever needed a wake up call on police brutality, this is it.