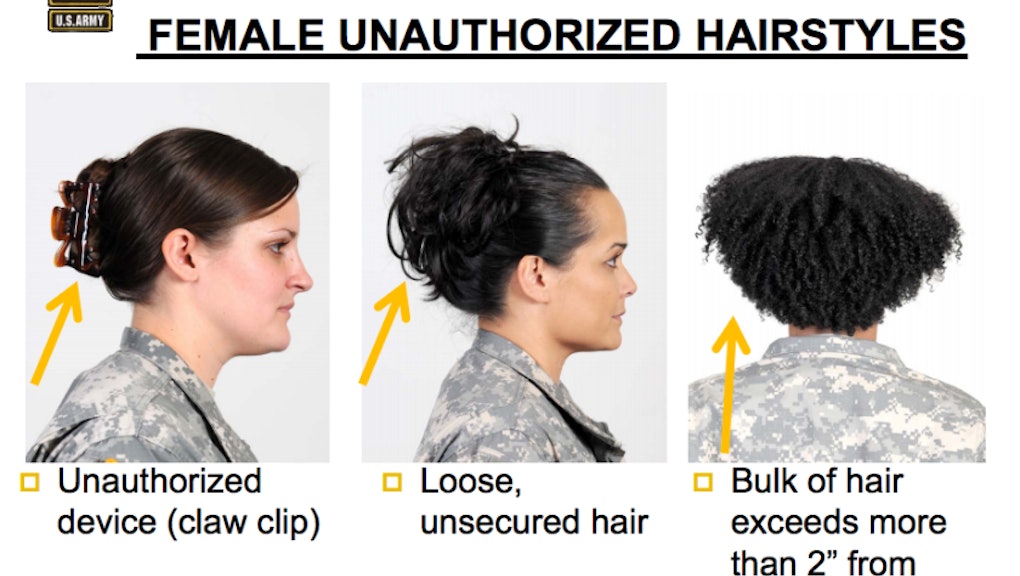 The Pentagon Is Finally Fixing Its Troubling Hairstyle Guidelines

On Wednesday, the military brass finally agreed that its rules may have been unfair towards women with naturally big, curly hair and rolled back the prohibition on cornrows, twists and large braids.

This came after a tidal wave of backlash resulted in a widely circulated White House petition and online think pieces galore. The Pentagon then promised a three-month review process to determine whether the new regulations were in fact racially biased.

According to the Washington Post, in a letter to the Congressional Black Caucus, Secretary of Defense Chuck Hagel wrote that each branch of the military "reviewed its definition of authorized and prohibited styles, and eliminated offensive language, including the terms 'matted and unkempt,' from both the Army and Air Force grooming regulations."

"Additionally, each Service reviewed its hairstyle policies to ensure standards are fair and respectful while also meeting our military requirements," Hagel wrote, according to the Post. "These reviews were informed by a panel of military personnel of mixed demographics reflective of our diverse force."

This is a win for female soldiers of color. While around 14.5% of active-duty U.S. military members are women, between 32% and 46% of those are women of color. And though the military has a vested interest in maintaining a safe, uniform standard of appearance, many of these women had been marginalized by the new regulations, which would have prevented them from wearing their hair in a natural way.

Though the Pentagon had to face intense criticism before it changed its mind, its updated decision has been welcomed by soldiers and lawmakers of color.

"These changes recognize that traditional hairstyles worn by women of color are often necessary to meet our unique needs, and acknowledges that these hairstyles do not result in or reflect less professionalism or commitment to the high standards required to serve within our Armed Forces," Congressional Black Caucus chair Rep. Marcia Fudge (D-Ohio) said in a statement.

The wheels of government may turn slowly, but sometimes, they do some good as well.