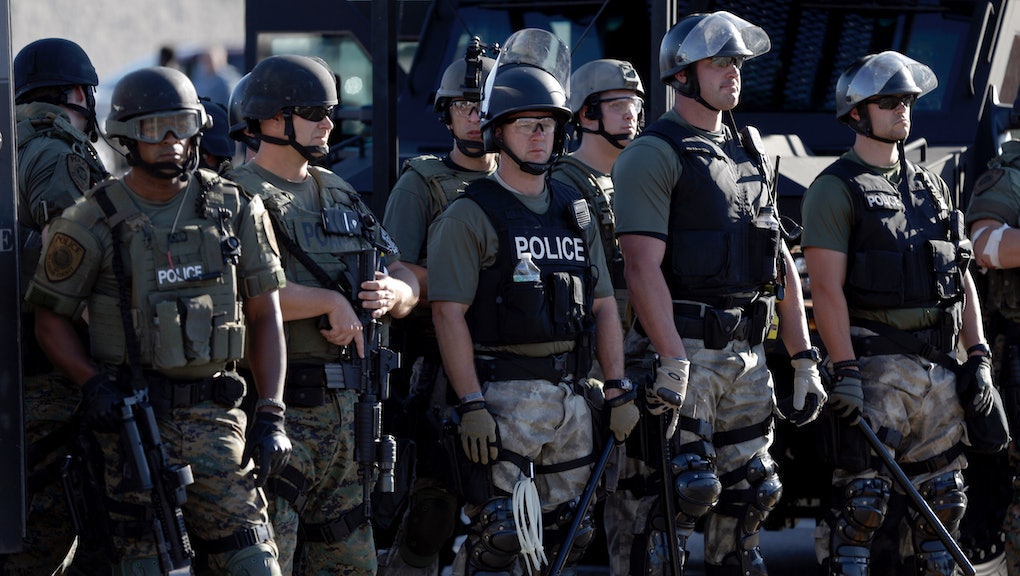 The news: Ferguson police have released a name for the officer who shot and killed Michael Brown on Saturday.

Police Chief Thomas Jackson identified him simply as Darren Wilson in a highly anticipated announcement to the press on Friday.

The announcement comes after six days of civil unrest in the St. Louis suburb, where demands for accountability around the 18-year-old's murder have met with a violent police crackdown.

The Washington Post's noticed something important missing from the announcement:

Jackson's announcement, if true, would hold Anonymous' claim to be incorrect:

This also comes three days after Jackson reneged on his decision to release the name to the public, citing "safety concerns," according to the New York Times. Shortly after, Anonymous announced via Twitter that it was confirming the officer's name and would release it "the moment we receive it," Mother Jones reports.

Background: In the six days since the officer killed Mike Brown, Ferguson residents have taken to the streets in protest.

A police crackdown led by heavily armed officers from 15 local jurisdictions helped turn the situation violent, prompting civil unrest and cumulating in the arrests of multiple residents, at least two journalists and a prominent local alderman, according to reports. Videos from the scene show officers firing tear gas at residents.

More: Julie Bosman and Erik Eckholm of the New York Times report the offending officer's continued anonymity was "fuelling the anger" of Ferguson dissenters. The police department's refusal of transparency during the investigation – "numerous death threats had been made" against Willman, according to Jackson – had concerned residents looking for accountability.

"I get why they want to protect him," 36-year-old Ferguson resident Meko Taylor told the Times. "But the people want answers. When we get answers, things will calm down."

The Ferguson police were not legally required to release the officer's name, the Times reports. But this policy is increasingly being challenged in courts around the country. Legal groups including the National Bar Association and the American Civil Liberties Union have called for the release of documents pertinent to the investigation, according to the Times. The Associated Press reports the FBI has also stepped in to investigate the shooting.

Takeaway: Despite the name being made public, it seems unlikely that tensions will ease completely in Ferguson until a full investigation is complete and a sense of justice is satisfied. As of now, that process has "no timeline," though Brown's autopsy will take "two to three weeks," according to the Times.