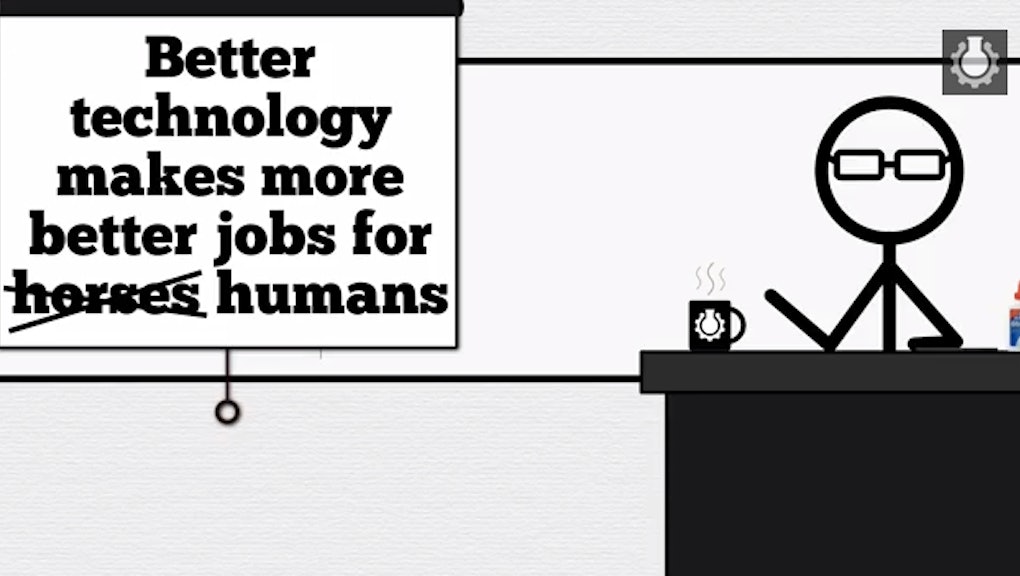 But according to YouTuber and Redditor C.G.P Grey, whose viral video "Humans Need Not Apply" outlines the unstoppable progress of automated machines, it's not far off.

In the video, Grey draws parallels between horses, which lost the race against automobiles, and humans, who will undoubtedly lose when the machines take over.

"As mechanical muscles pushed horses out of the economy, mechanical minds will do the same to humans — not immediately, not everywhere, but in large enough numbers and soon enough that it's going to be a huge problem if we're not prepared. And we're not prepared," Grey says in the video. "Technology gets better, cheaper and faster at a rate that biology can't match."

Even if unions cause a fuss, as Grey points out, "Workers always lose and economics always wins." That is true for white collar jobs as well. Clerical work, even simple paperwork for lawyers and diagnosis and treatment by doctors, can easily be taken over by professional robots. Automatic software has even started writing some newspaper articles (though not this one):

For employers, robots simply beat humans in every category.

And for those in creative fields, Grey has some blunt, bad news for you: "But perhaps you're unfazed because you're a special creative snowflake. Well, guess what: You're not that special."

Robots that can draw and paint:

And robots that can play chess against humans — and win:

As Grey puts it, it's just a matter of time before robots take over humans jobs at every level and sector of modern economy. "This stuff isn't science fiction. The robots are here right now," Grey says. "We have been through economic revolutions before, but the robot revolution is different."

So what can we do? Grey doesn't offer any easy solution to the rising robot problem. Rather, he encourages the viewer to embrace the coming future, and to take proactive steps to address it. "We need to start thinking now about what to do when large sections of the population are unemployable through no fault of their own; what to do in a future where for most jobs, humans need not apply," he says.