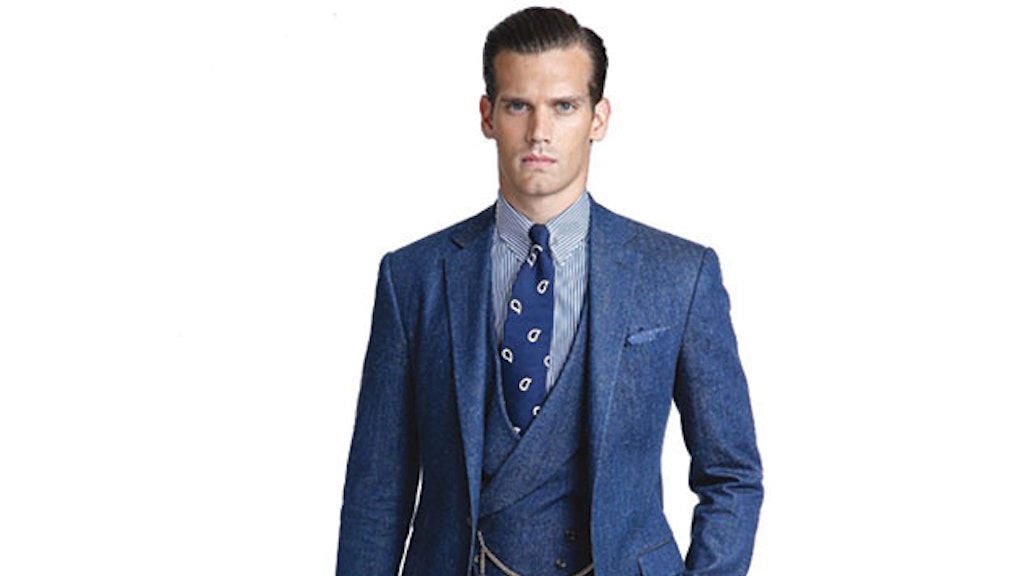 The Canadian Tuxedo Is Going Luxury

The news: The sartorial wizards at Ralph Lauren just revealed the designs for their spring 2015 line, and it includes two versions of the Canadian Tuxedo — in other words, a jean suit:

The first version, pictured above, is a three-piece suit. It's the more assertive of the two designs. As Bloomberg Businessweek notes, "There's no way to be casual about it— no way to shrug [the denim] off as casual coincidence."

The second, right out of a 1980's Levi jeans commercial, is much different:

The suit in action. Churck Norris favored a more casual version of the ensemble, while others have taken that even further:

Timberlake took things to an entirely new level in 2001 at the American Music Awards:

It's definitely made a comeback in 2014, however. Both Marie Claire and Glamour's August issues are denim-focused, and celebrities like Miranda Kerr and Emily Blunt have been seen out and about in their very own Canadian Tuxedos.

Can the popularity translate to a suit? Ralph Lauren's new design is admittedly ridiculous, but take a moment to envision the possibilities. Imagine if Wall Street was a sea of blue denim rather than charcoal pinstripes; if in every boardroom in America, instead of cufflinks and Italian cashmere, there was a variation on this:

Given that jeans were initially used as trousers for factory workers, it would be particularly ironic if high-flying businessmen started rocking them. While they're not typically known for their adventurous sartorial sensibilities, we're secretly hoping one will be brave enough to try the denim suit — it won't be the most embarrassing thing that's happened on Wall Street, after all.