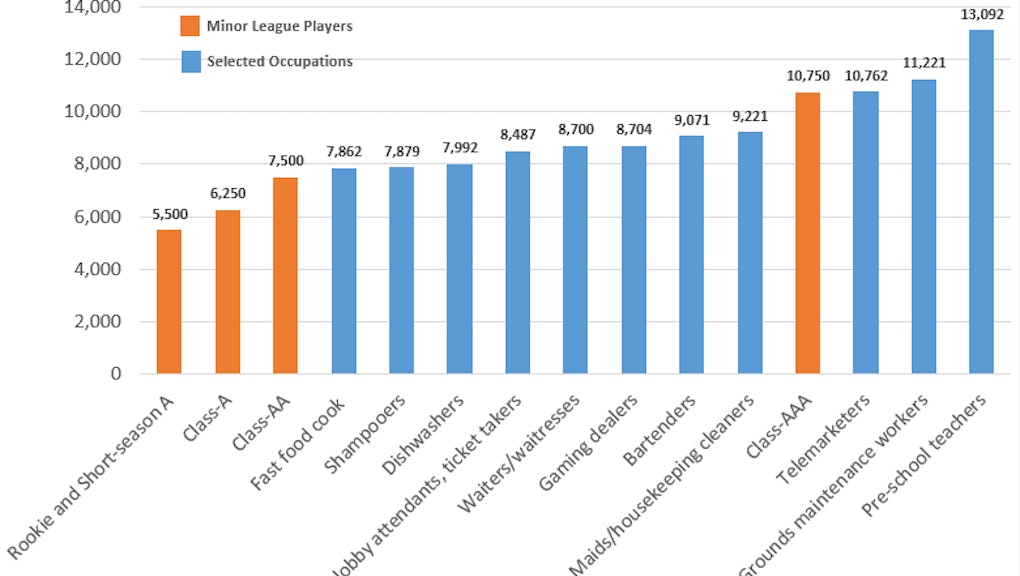 If you are employed, you are making more money than the average minor-league baseball player does. It would probably be illegal not to be. In fact, even fast food cooks — the lowest-paid occupation according to the Bureau of Labor Statistics — earn significantly more per month than the vast majority of players in the minors.

Minor-league ballplayers don't play the game expecting to make a lucrative income while enduring long bus rides up and down the Atlantic coast. But they all presumably cling to the hope that somehow they’ll be able to work their way up through the farm system and reach "The Show" (and its $500,000 minimum salary).

The math is hardly in their favor: about 83% of all minor leaguers will never play a single major-league game. What's more likely is that a player will never make more than $7,500 during a five-month season. Considering that players often play seven days a week and work more than 50 hours a week (excluding travel time), a Class-AA player's alleged $1,500 monthly income could be conservatively estimated to be the equivalent of $7.25 per hour (excluding meal per diems).

That's the federal minimum wage, yet that's actually relatively good pay for a minor leaguer. Men playing Class-A ($1,250/month) are looking at $6/hour compensation, while Rookie and short-season-A players ($1,100/month) are earning even less than that.

Facts like those have a group of former minor leaguers calling foul.

A proposed class-action lawsuit filed earlier this year claims that Major League Baseball must at least pay minimum wage to its minor league athletes. The current system — one in which minor leaguers are not compensated for overtime and actually earn less today than they did in the 1970s — is tantamount to "exploitation," the lawsuit claims.

To make matters worse, minor leaguers aren't paid for taking part in spring training. Or for completing mandatory workout sessions four to six times a week in the off-season.

Climbing the farm-system ladder has never been for the faint-hearted. But considering that MLB could reach a record $9 billion in revenue this year, flirting with the poverty line ($11,490 for a single person; $23,550 for a family of four) does not have to be part of the job description.