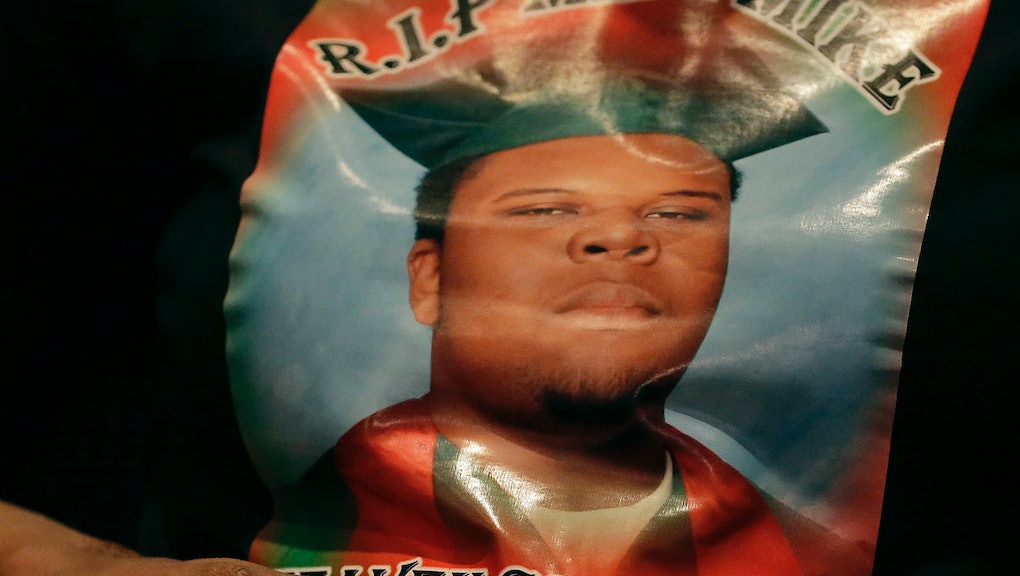 Details of the official county autopsy of Michael Brown, the black teenager who was gunned down in Ferguson, Mo., were leaked today to the Washington Post. Among the findings was the revelation that the victim had marijuana in his system at the time of his death at the hands of police officer Darren Wilson on August 9.

How this fact will affect the investigation of his death or any potential prosecution of the officer who killed him is unclear, but one thing is certain: It absolutely should not matter.

The autopsy report from St. Louis County's chief medical examiner, Mary Case, says that Brown had marijuana in his system. This doesn't necessarily mean that Brown was high at the time of the fatal confrontation — simply that he may have consumed cannabis in the days or weeks prior.

Furthermore, even if Brown was high at that very moment, there is absolutely no evidence to show that being high made him more confrontational or more violent. The idea that marijuana is a drug that makes you crazed and violent is completely arcane, more akin to propaganda from 60 years ago than a lucid consideration of the drug's effects. And say, for argument's sake, that he was high as a kite. Did that warrant the bullets to the face and chest that killed him?

In addition to the examination by Case, Brown's family also requested an examination from independent expert Michael Baden, who at a news conference Monday said that he saw no signs of a struggle, debunking the claim by Ferguson police that Brown was resisting arrest. However, Baden said he needs to see more items, such as the victim's clothes, in order to make a definitive conclusion.

At the news conference at Greater St. Marks Family Church, Daryl D. Parks, a lawyer for the Brown family, pointed out that the lethal gunshot wound entered Brown's body at the top of his head. "He tried to surrender," said Parks. "Why would he be shot in the top of his head?" The answer to that question has yet to be settled, and another examination of the body, ordered by Attorney General Eric Holder, is still pending.

All the evidence thus far points to gross abuse of power by a police officer, and a gravely flawed enforcement system that is trying to protect him. Whether Brown had marijuana in his system at the time of his death is immaterial to the case.