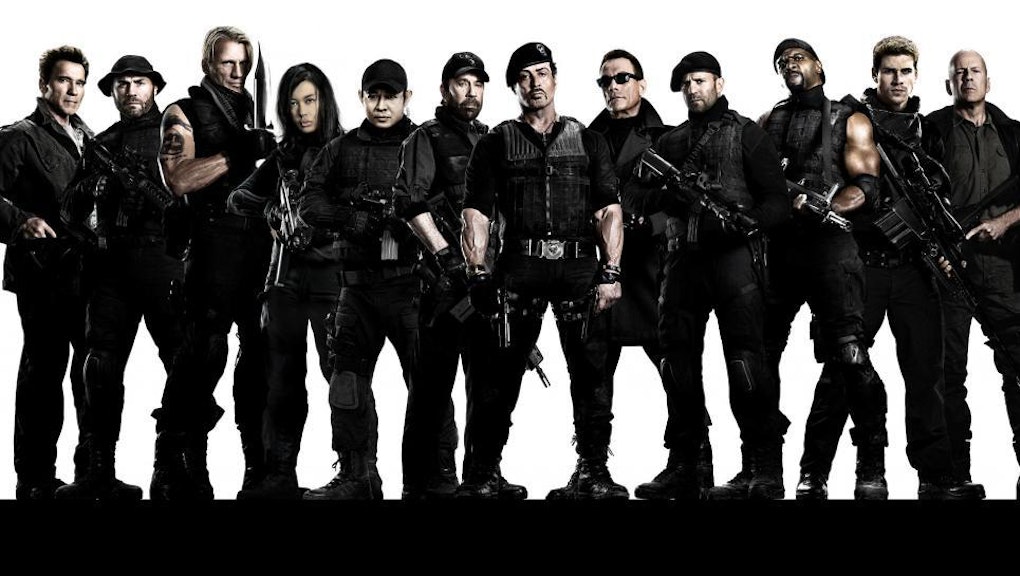 Yes, There Was a Gay Couple in 'The Expendables 3'

If you didn't go to see The Expendables 3 this weekend, you might have missed out on one of the most interesting gay couples in a blockbuster this year.

Even if you did go see it, you may have still missed it. The moment is fairly small but it's completely deliberate. In the denouement of the movie, Arnold Schwarzenegger's "Trench" and Jet Li's "Yin Yang" are canoodling at the team's favorite bar when Sylvestor Stallone's character tells them to "get a room."

Director Patrick Hughes was asked about the moment in an interview with Grantland. "Did the former-Governator just silently flip off Prop 8? Are two of the Expendables together by the end of the movie? 'I believe they are,' Hughes says, like he just got away with something amazing."

There are myriad reasons why this moment is noteworthy and they're all worth mentioning: one of Hollywood's biggest action stars being depicted as gay, a gay couple being a part of a crimefighting team, and also the subtle way the inclusion is slipped in — not a plot point, just a fact of life.

Of course, this becomes even more interesting when considering Schwarzenegger's position on gay marriage as the former Governor of California and the inherent politicization the moment and the actor bring. His views have been mercurial at best: In 2005 and in 2007 he vetoed a same sex marriage bill, saying it was up to the Supreme Court to decide, but in 2008 he came out in defense of gay marriage for the first time, standing against Proposition 8. Then in 2012, his  view was far more vague. Although he performed several gay wedding ceremonies, including one for his chief of staff Susan Kennedy's wedding, he was difficult to pin down on the topic. "I don't have to be for gay marriage," Schwarzenegger said in an interview with journalist Lesley Stahl quoted by Pink News, "I'm for that she [Kennedy] gets the kind of wedding and the kind of ceremony that I had when I got married with Maria [Shriver]."

The moment is small, but it's almost all the better for it. It is not played for jokes like so many unexpectedly homosexual characters and it subverts the expected tying up of loose ends in an action movie during which men are usually rewarded with women. The Expendables also tends not to be concerned with sex or romance: Cinemablend went so far as to call the Expendables "sexless movies." For this to be one of the few sexual moments is great. It's also, hopefully, a sign of what's to come.