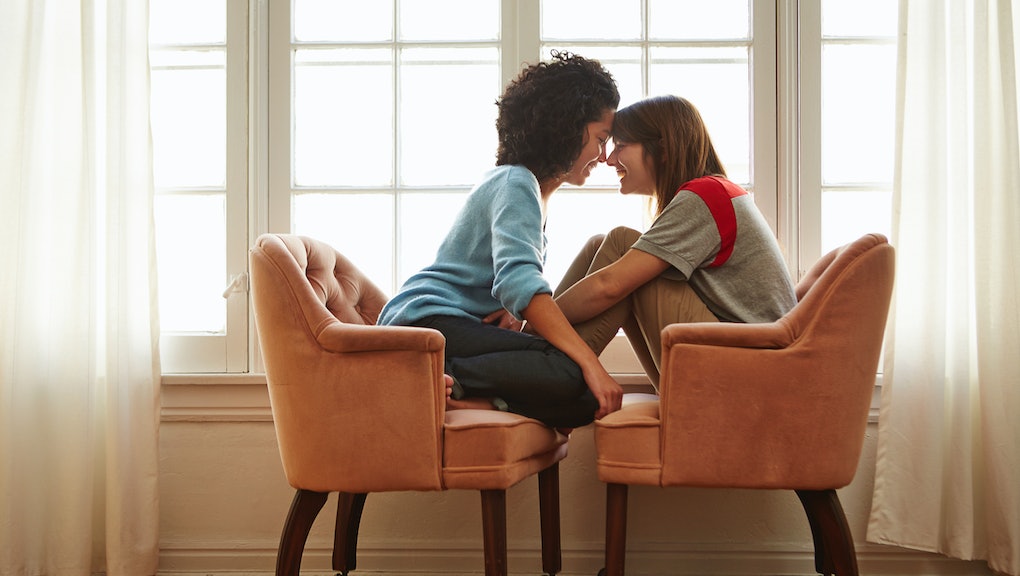 New Science Reveals the Best Part of Being a Lesbian

They have better sex.

Women who sleep with women orgasm far more frequently than their hetero peers and climax almost as often as straight men, according to a new study from Indiana University.

Lesbians orgasm during sex 75% of the time they sleep with a familiar — a far higher rate than straight women, who only climax during two out of three sexual encounters. Bisexual women have the worst luck in the department, orgasming just 58% of the time. Unsurprisingly to almost anyone, men (gay or straight) reached climax at a far higher rate of 85%. Bisexual men, on the other hand, orgasmed a bit less at 78%.

The study authors pose an interesting but unconvincing reason for their findings. "Lesbian women," they write, "are more comfortable and familiar with the female body and thus, on average, are better able to induce orgasm in their female partner." Sounds right, but is it?

Hm, not quite. Seemingly unbeknownst to the straight community, great sex isn't something that just comes naturally to lesbians because they share the same body parts. Women (gay or straight) invest a lot of time and energy figuring out their partner's likes and dislikes. "Being a woman does absolutely nothing to provide us with a magical golden key to the heart of female sexuality," writes AlterNet's Greta Christina. "There is no heart of female sexuality. There are only female sexualities. And they're all really different."

The real reason lesbians do it better: First, anxiety doesn't have as much impact on the quality of lesbian sex as it does on heterosexual sex. A 2009 study, for example, found that in straight couples with one anxious participant, both partners had issues with all aspects of sexual functioning, from lubrication to pain and reaching orgasm. Among lesbians, however, anxiety only partially impacted the quality of sex.

There's also the fact that women who have sex with women don't have to automatically be ready for sex as soon as one partner gets an erection. Hetero men, take note. "There's not the looming issue of a hard-on and how the hard-on will be serviced," writes Huffington Post blogger Jincey Lumpkin. Plus, women can have multiple orgasms in quick succession, so they don't have to wait to become excited again after climaxing.

The findings should teach all of us, regardless of sexual orientation, some valuable lessons about intimacy. Thanks, lesbians, for helping everyone out.