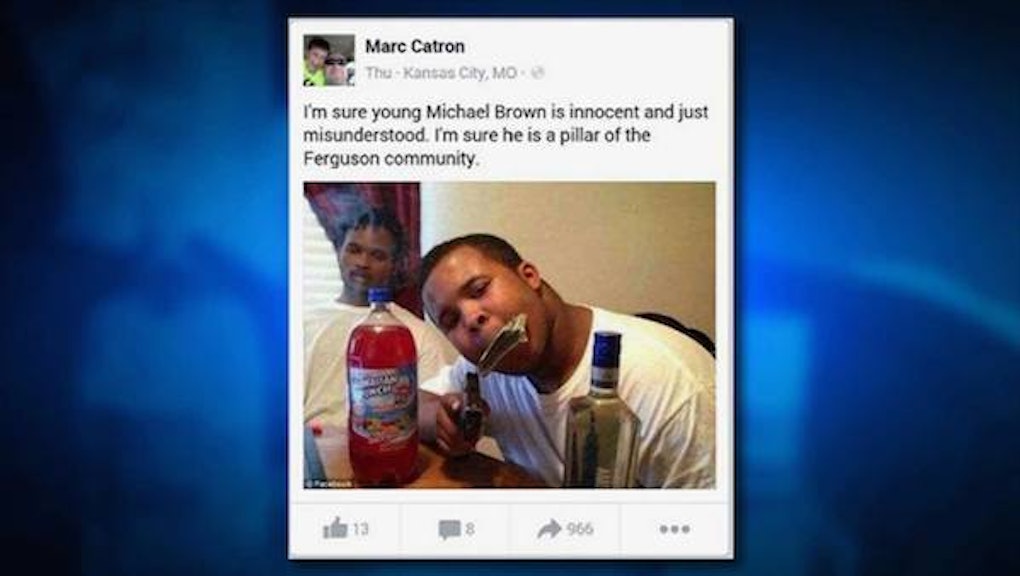 The news: A Kansas City, Mo., cop has found himself in hot water after posting a spree of thinly veiled racist images on Facebook deemed serious enough to constitute a personnel issue, according to the city police department.

Officer Marc Catron already has an 800-member Facebook group dedicated to his firing after posting two racist photos online. KCTV5 obtained both. Here's the first, which is supposedly a photo of slain Ferguson teenager Mike Brown but is actually of accused Oregon sledge hammer-killer Joda Cain:

Whoops, either all black people look so alike Catron couldn't be bothered to double check, or he knew it wasn't Brown but simply wanted to suggest all young black men are dangerous criminals. Either way, a police officer suggesting that an unarmed black teenager deserved to be shot because of a compromising selfie is pretty disgusting.

Catron didn't stop there, either, making clear how he felt about black people in general with a racial meme: "Remember how white people rioted after OJ's acquittal? Me neither!"

(White people did riot after Joe Paterno got fired and continually do over soccer, though.)

KCTV's full report can be seen below, including an interview with Cain's aunt, who says: "The police officer thought it was funny? Nobody's laughing. It's not funny ... What is he trying to say? That all black teenagers are gangsters?"

Perhaps sensing that racial tensions in Missouri are a little hot right now, KCTV reports that the KCPD has now launched an internal review of Catron's Facebook racism. But the damage has already been done, covered in countless major publications.

Why you should care: Gawker simply branded the officer a "racist idiot," but it's chilling that this particular racist idiot gets to carry around a badge and a gun all day in a 29.9% black city. And while not every cop is a racist idiot, police forces do act in systemically racist ways — including in Kansas City. A study of 2,329 drivers there found that 28% of under-25-year-old black men had been pulled over for an investigatory reason in the past year, compared with just 12.5% of young white males and 7% for young white women. It also concluded the higher stop rate among black men wasn't linked to actual traffic violations.

Nationally, Amnesty International estimated in 2004 that 32 million Americans had been subject to racial profiling.

Even some conservatives like Sen. Rand Paul recognize that American prisons are disproportionately full of black and brown people serving inappropriately long sentences for drug crimes. In an op-ed in Time on the situation in Ferguson, Paul wrote that "Anyone who thinks that race does not still, even if inadvertently, skew the application of criminal justice in this country is just not paying close enough attention."