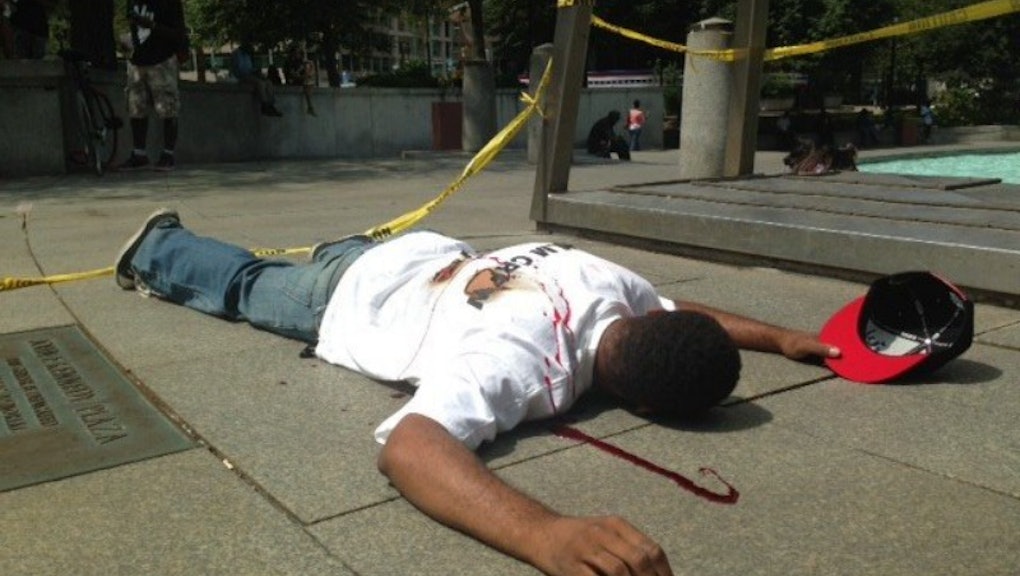 Last Saturday, a group of artists decided to stage a silent protest in front of the LOVE statue, an iconic Philly landmark. The group seized on what was perhaps the most gruesome detail from Michael Brown's shooting death in Missouri: the fact that his body was left uncovered on the street in broad daylight for hours.

So Keith Wallace, an MFA acting student at the University of California and Philadelphia native, decided to pose as a dead body. Covered with blood, bullet holes and even police caution tape, Wallace lied down and stayed absolutely still for an hour — right in front of one of the busiest tourist attractions in the city.

"It was something that's been brewing for a while in my mind," Wallace told Think Progress. "You realize, in these cases, there's a disproportionate amount of black men on the receiving end of this police brutality. And as a young black men, it strikes a different chord for me — it hits a little closer to home."

And what he experienced was shocking. While some people realized that the display was an act of protest and were moved by it, others were occupied by a more immediate concern: getting their photo-op.

"There was an older white couple that wanted to take a picture in front of the LOVE statue," Lee Edward Colston, one of the protesters and a Juilliard theater student, told Philadelphia Magazine. "The older white gentleman said, 'Why do they have to shove their politics down our throats?' The woman replied, 'They're black kids, honey. They don't have anything better to do.'"

And even those who thought Wallace was a legitimate dead body didn't want to miss out on the picture.

"There was one group of white guys who wanted to take a picture in front of the statue, but one of the guys in the group couldn't take his eyes off of Keith's body,'" Colston added. "His friends were trying to convince him to get in the picture. He told his friends, 'Something about this doesn't feel right, guys. I don't think we should.' One of his friends replied, 'Dude, come on ... he's already dead.' Then they all laughed."

The sight of a dead black man riddled with bullet holes was treated as a mere nuisance by these photo-hungry tourists, who had all apparently missed the irony of the statue behind them. "My body lay at their feet, and the statue was above all our heads. So you can still have your picture and choose to ignore the ugliness that was literally right at your feet," Wallace told ThinkProgress.

Even in the City of Brotherly Love, people had trouble mustering up enough love for a moving protest or even for a seemingly dead body — giving us a stark reminder of Brown's death. If we can't respect a corpse, how can we respect a living person?