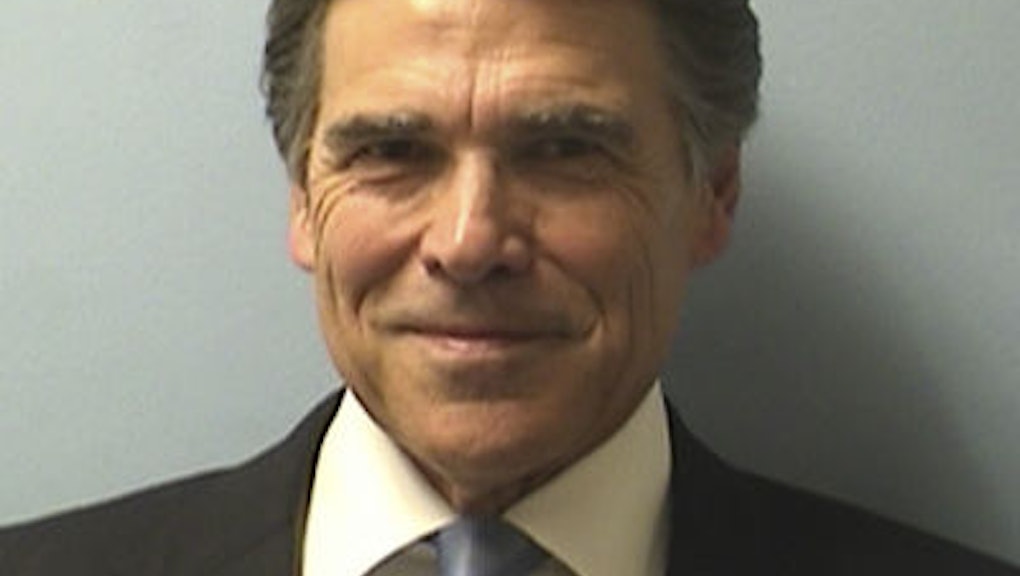 Rick Perry's Mugshot Was Just Asking to Be Photoshopped. Luckily, the Internet Answered.

The news: In case you missed it, Texas Gov. Rick Perry (the guy who made that anti-gay ad in 2011) was indicted this week on abuse of power charges.

While even some liberal writers like Jonathan Chait and Michael Lind have an uneasy feeling about the lawsuit, the Internet didn't waste any time getting to the all-important business of celebrating by photoshopping his mugshot. According to the Statesman, the governor surrendered himself to the Travis County criminal justice center on Tuesday for processing. Here's his booking photo:

It didn't take long for Perry's mugshot to go viral and get the official Internet treatment.

One dude even painted him with an pancake on his head:

This one just about sums it up:

The power: Perry faces two felony counts for vetoing $7.5 million in state funding for county District Attorney Rosemary Lehmberg's public integrity unit after she refused to resign at Perry's request. Democrats claim that the governor's threat to veto her funding constituted an abuse of power. Perry and his defenders, for their part, point to the fact that Lehmberg was involved in a disastrous drunk driving incident and that the governor's veto power is more or less absolute.

Perry's charges are pretty serious and in the event he is found guilty, they could carry a penalty of two to 109 years in prison. Liberals say Perry's threats to the public integrity unit were motivated by inappropriate political concerns (like shielding Republicans from corruption charges), but proving that in court will be very difficult.

What now? Unfortunately, you probably won't be photoshopping a genuine photo of Perry and his perky new glasses behind cold, hard Texas jail bars anytime soon. The Daily Banter's Jessica Huseman writes, "He's not going to jail. And no amount of Internet-fueled hatred of the man is going to change that fact." The governor has an expert legal team and a pretty solid defense. And heck, winning will probably make Perry bolder than ever.

Nevertheless, we've now all seen Rick Perry with a pancake head, and that will never go away.