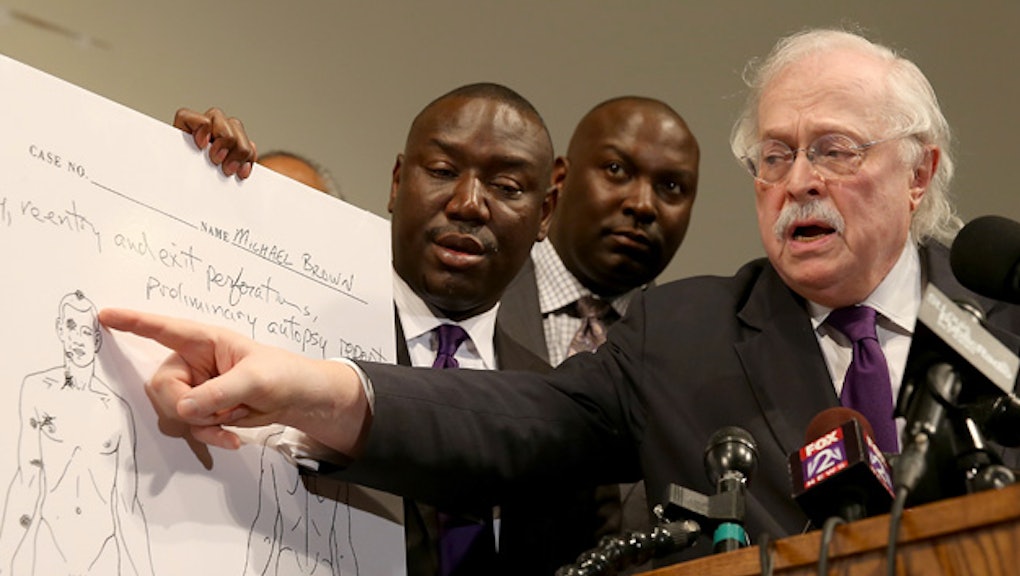 Editor's note: This story was originally reported and written by A.C. Thompson and published by Pro Publica.

As a journalist, I've read roughly 1,000 autopsy reports and spent much of my career reporting on fatal encounters between police officers and civilians. Here's some of what Baden found and what experts will be looking for as they examine Brown's corpse:

1. Evidence that Brown was fleeing from the officer who shot him

Shots to the back are a red flag, indicating the victim may have been running from the officer rather than attacking. The basic law on use of force turns on whether a police officer acted from a "reasonable belief" that he or she was facing a lethal threat. Baden — who was hired by Brown's family — believes Brown was shot at least six times with all the bullets striking him from the front.

2. Signs of a physical altercation

Forensic pathologists study the exterior of the body for bruises, scrapes and lacerations which can be signs that a scuffle preceded the fatal shots. Witnesses have said Brown and Wilson wrestled in the moments before the killing. On Baden's diagram of Brown's body, the doctor does not appear to have noted any significant injuries other than the gun shot wounds. Baden did not find gunpowder residue on Brown's hands, one piece of evidence that would likely be present if the two men were struggling for control of a gun discharged at close range.

Shots fired at a downward angle may indicate the officer fired while the victim was on his knees or laying on the ground. A person in those positions generally poses less of a physical threat. Baden said a shot to Brown's head appeared to have come from above; he believes this was the fatal shot.

Baden voiced concern over the fact that Brown was hit by at least six shots. The doctor, who served earlier in his career as chief medical examiner for New York City and as an expert for the New York State Police, was quoted by the New York Times as saying, "In my capacity as the forensic examiner for the New York State Police, I would say, 'You're not supposed to shoot so many times.'" The number of shots may or may not be significant. Training on lethal force varies from department to department. Many forces train officers to continue firing until the suspect has been completely subdued. Some experts say that incidents in which a civilian has been hit with a single shot are more suspicious than those with multiple shots: The lone bullet could have been fired accidentally or in a moment of rage.

The presence of gunshot residue (GSR) on the skin or clothes of the victim may mean that the person was shot at very close range. Baden found no GSR on Brown's body, but said he did not scrutinize his clothing. Additionally, bullets fired from a few inches away leave distinct wound patterns on the flesh. Baden's report suggests the shots were fired from further away.

6. The presence of alcohol or drugs

Baden has not reviewed the toxicology tests, but results of those tests should be available soon (though it could take the authorities months to release them). Forensic pathologists typically fill vials with bodily fluids — urine, blood, or vitreous humor, the fluid within the eyeballs — and send them off to outside laboratories to be screened for alcohol, prescription drugs, and street drugs. If drugs or alcohol are discovered in Brown's system, that information might provide some additional context to the fatal events.