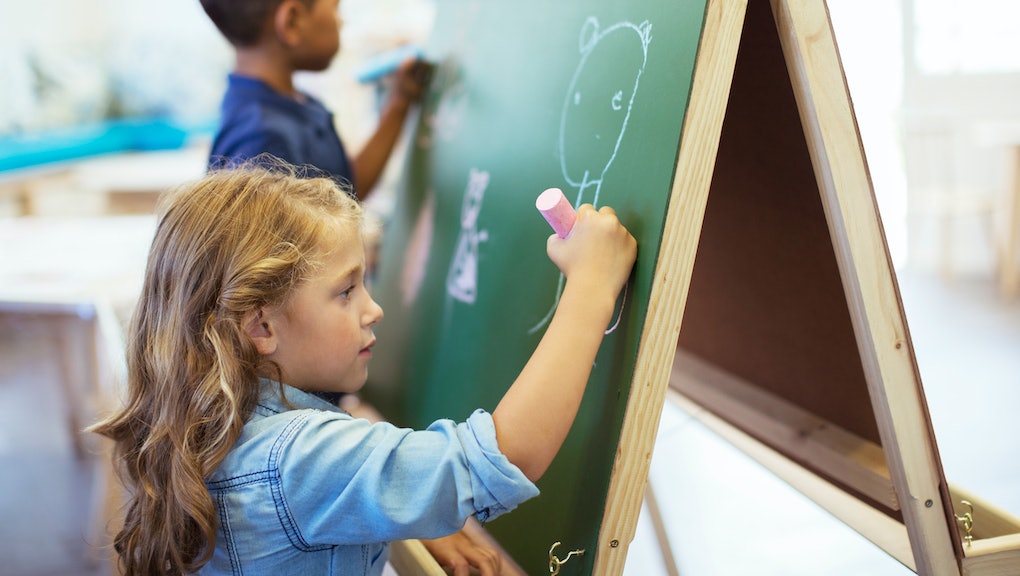 Want to Know How Smart a Kid Is? Look at Their Artwork

How do you know if a child is going to grow up to be a genius or a doofus? The way she walks? The way she talks? What about her first word or first sentence? According to a new study from the Institute of Psychiatry at King's College London, the best measure is none of the above. Instead, you should look at how she draws.

The study: Taking a sample pool of 16,000 children — half identical twins (who have the same DNA) and half non-identical twins (who share about half of their genes), to control for genetic and environmental factors — the researchers compared the quality of a young child's drawings with their intelligence test scores years later.

Four-year-olds who could draw fairly accurate stick figures — human depictions that have at least two legs and arms, a head and body, some hair on their head and basic facial features — had higher scores on intelligence tests a decade later. Those who couldn't draw well scored lower. Importantly, the identical twins' sketches resembled one another more closely than the drawings of the non-identical twins, allowing the researchers to conclude that the link between drawing ability and intelligence is genetic.

The basic findings, that the drawings predicted intelligence, were not too surprising; doctors have been using the same test to gauge children's mental capacity since the 1920s.

But what surprised them was that the score a child received at age 4 correlated with her intelligence in her teens. The fact that such a seemingly nonscientific test could predict someone's mental capacity up to a decade later is definitely worth some attention.

Why it matters: Besides language, drawing is one of our primary forms of communication. Because of this, study author and psychiatrist Rosalind Arden believes it's not too much of a leap to say there is a connection between early drawing ability and intelligence. "This capacity to reproduce figures," Arden explains, "is a uniquely human ability and a sign of cognitive ability." The findings aren't set in stone, however. Our genes (and the drawing abilities they partially bestow upon us) are simply one of many factors that determine how smart we are.

Still, the fact that there could be any correlation between a child's preschool doodles and her SAT score is pretty alarming. Perhaps it's time to re-examine that family portrait you crayoned under the stairs.