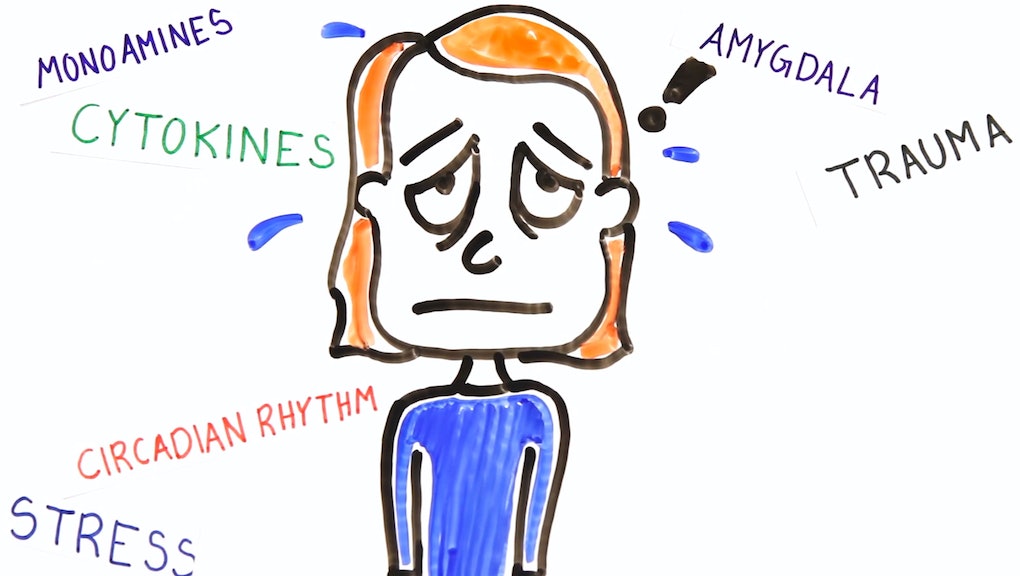 What makes people so sad they consider ending their lives?

A new video simplifies all the recent research, from the physical changes that take place in the brains of depressed people to the way the condition develops (hint: it's not the result of watching The Notebook a few times).

Now, let's break all that down:

Specific brain regions are affected by depression: In depressed people, a seahorse-shaped region called the hippocampus, which is critical for helping us form memories and process emotions, shrinks. Scientists think the reason behind this startling physical change has something to do with the hippocampus being influenced so markedly by stress. In particularly taxing situations, less blood can flow to the region, causing it to gradually dwindle.

It's not all about serotonin: In the past, scientists thought depression was caused by an absence of one "feel-good" chemical, called serotonin. So when scientists gave people drugs that increased their serotonin levels and their symptoms decreased, they thought they'd nailed it. Not quite. It turns out that the serotonin-protecting drugs weren't just creating more of the feel-good chemical, they were also fostering the growth of new brain cells.

Your parents are (actually) partially to blame: Depression can run in the family, and people with a variation in one specific chunk of DNA, called the serotonin transporter gene, are more vulnerable to the condition. Each of us has two copies of the serotonin transporter gene, one from each parent. People with one copy of the affected gene are more likely to get depression than folks with no affected copies, and people with both are at a far higher risk.

Depression doesn't just hurt: Just like cancer or Alzheimer's, depression isn't something you can control. But now that scientists are homing in on the roots of the condition, chances are we will see a host of better treatments in our lifetimes. In the meantime, if you have a friend or family member with depression, show them you care. It could mean a world of a difference.