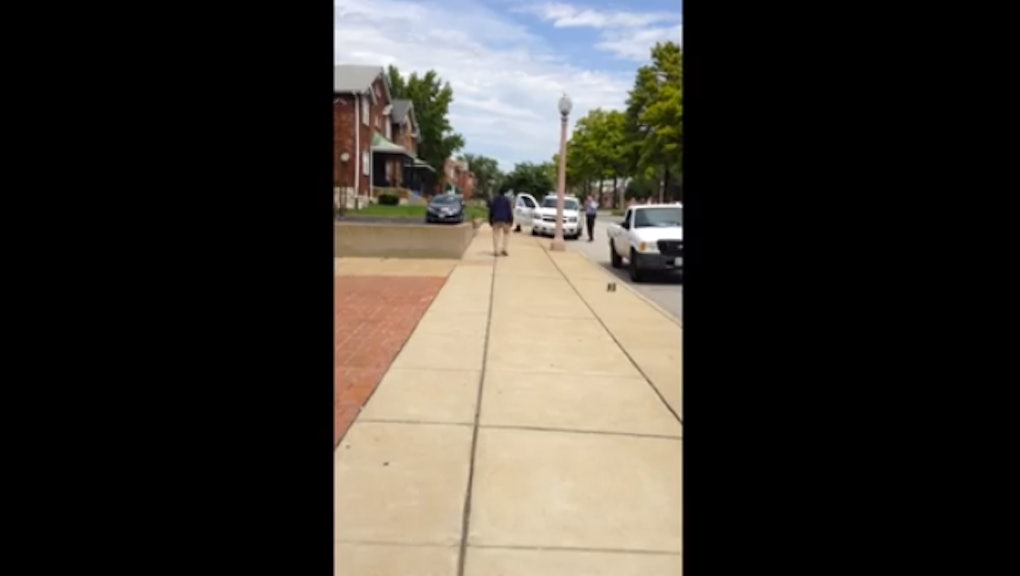 Another Missouri Shooting, Caught On Tape, Proves It's Time to Outfit Police With Cameras (GRAPHIC)

The officers, who were still in the patrol vehicle, and witnesses say the suspect yelled, "Shoot me now, kill me now." The police officers yelled at the man to drop the knife, but Dotson says he did not respond to verbal commands... [When the suspect] moved between three and four feet from the vehicle holding the knife, both officers fired their weapons, striking him.

In St Louis, nerves were and still are understandably raw: The incident with Powell came barely two weeks after the shooting death of Brown at the hands of a white officer over an (allegedly) similar incident just a few miles from Ferguson. Following the shooting this Tuesday, a crowd quickly gathered at the scene. While the initial reaction of the crowd was caught on video (below), information on the shooting itself was first based solely on written accounts.

Witness Robert Addison told the River Front Times that Powell had mental health problems and when officers encountered him, he was behaving erratically. "Both officers fired at least five shots from their weapons," Addison says. "I thought it was excessive. Shooting him multiple times like that? He was going down from the one shot. They opened up on him."

Why it matters: Like almost everyone who's spent the past two weeks dissecting the shooting death of Michael Brown in Ferguson (often from the comfort of their armchairs), those viewing this incident from a distance are not forensics experts. The cell phone video released by police is nowhere near close to a definitive, clear account of the incident. The video does seem to largely match the account provided by St. Louis police. We can hear officers instructing the suspect to remove his hands from his pocket at 1:26; we can hear the suspect shouting "shoot me, shoot me now" between 1:30 and 1:34, before the two officers open fire.

But questionable details remain. As Addison pointed out, and as the bystanders can be heard uttering in the video, the dozen shots officers fired at Powell seem excessive to the casual observer's eye. We can spend hours debating whether Powell, like so many other young black people, deserved to die over a few stolen items. But one unquestionable fact that in this instance, we actually have footage we can watch and evaluate, rather than relying solely on the accounts of responding officers. The videos are source material for independent investigators, prosecutors, and concerned citizens to view and evaluate, something lacking in the case of Michael Brown.

Transparency breeds trust, and by moving to release these materials as quickly as they did, the St. Louis police department is doing a much better job of allaying community concerns than the Ferguson police. As Mashable's Brian Ries notes, "the pace of information released in the Powell shooting is in stark contrast to the Michael Brown case, in which the slow trickle of information released by police sparked protests in Ferguson" (and a conscious decision on the part of the St. Louis police).

But access to physical evidence can extend beyond bystanders; the push to outfit police officers themselves has been gaining traction, even before Brown's murder in St. Louis. In February 2012, the city of Rialto, Calif.'s 70 police officers participated in a controlled study in which they were obligated to wear a camera filming all their interactions (and the results were found to be positive). In the wake of the violence in Ferguson, New York City's Public Advocate called on New York City to experiment with similar body cameras, and the police force in Bremerton, Wa. is one of the latest department to consider their use.

The tragic death of Kajieme Powell, even if argued as justified as self-defense, may show just why these cameras are important — not only for the accountability and transparency they establish, but also for the moments they capture.