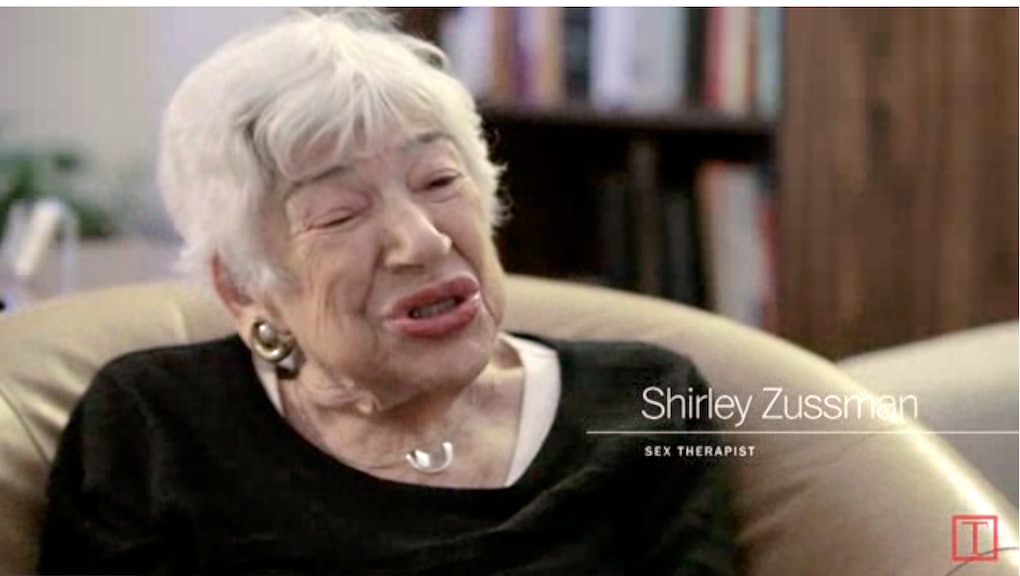 The news: Social reactionaries nervous about today's so-called "hook-up culture" should chill out. People have been "hooking up" for decades, and there's nothing better or worse about what's going on today.

In an interview with TIME, 100-year-old practicing sex therapist Shirley Zussman put the challenges facing Americans and their sex lives into historical perspective. It turns out Americans today are in pretty good sexual standing.

She said that today's hookup culture is "very much [more] modified, and limited" than the 1960s sexual revolution, which was more frantic and pressured. As a result, many of today's relationships have more intimacy, closeness, understanding and fun.

With decades of experience under her belt, Zussman is a unique authority on evolving sexual mores in the United States. The major changes she outlined include that people are increasgingly open about discussing sex, and that birth control is readily available, which triggered "an overwhelming immersion in the whole idea of getting more pleasure out of sex. It was not just about having babies."

A downside of living today is the frantic pace of work and life, which Zussman says can adversely affect sexual desire. "There is a limit to how much energy and desire and time you can give to one person when there is all this pressure [to] make more money, to be the CEO, to buy a summer house, people want more and more and more," she told TIME. She claims lack of sexual desire is the most common complaint from her patients.

The more things change, the more things stay the same: The challenges Americans face today in their sex lives are different, but not worse than, those older generations faced. And a lot remains the same.

This is especially apparent in the research on hookup culture. A report by the conservative National Marriage Project found that fewer people reported starting a successful relationship after "hooking up," but a pretty healthy margin (36%) of the healthy relationships actually began as casual sex. Another study in the Journal of Sex Research found that two surveys taken from 1988-1996 and 2004-2012 reported similar numbers. TIME's Eliana Dockterman discovered comparable trends all the way back to the '60s and '70s. Less than 15% of current college students report having any kind of physical contact more than twice a year.

But: Zussman's focus on overwork, busyness and the commercialization of sexuality suggests modern American sex lives are being harmed by the economy. Sexual health goes hand in hand with work conditions, so the next time you can't find the time to slow down and enjoy your sex life, it might be your job that's partly the problem.