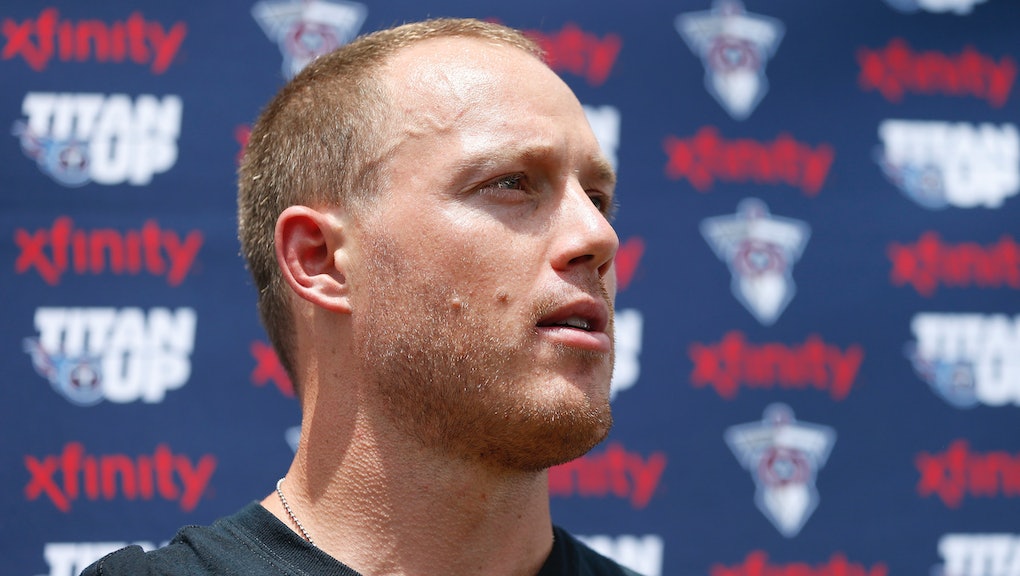 The news: This week, former Tennessee Titans linebacker Tim Shaw made yet another Ice Bucket Challenge video to support the ALS Association. But this one had a twist. Before dumping the ice over his head, Shaw told the audience that he was recently diagnosed with ALS — and challenged the Titans and Penn State football coach James Franklin.

And the whole team did it:

Shaw's diagnosis at the age of 30 is incredibly sad, but it's wonderful that he's using his misfortune to help further the search for effective treatments or cures to help the 30,000 or so Americans with ALS in any given year.

The background: Amyotrophic lateral sclerosis is a neurodegenerative disease that causes symptoms like muscle weakness and atrophy. It's the same condition that afflicts physicist Stephen Hawking. ALS is sometimes referred to as a "glass coffin" because patients continue to sense the world around them as their motor neurons die and leave them unable to move or speak. Median survival time for ALS is just 39 months and 96% of patients die within four years. Scientists do not adequately understand the causes of ALS and because of its relative rarity, research is still in middling stages.

The Ice Bucket Challenge, whose proceeds go to the ALS Association, asks the public either to dump a bucket of ice water on their heads or donate to ALSA. It's attracted its share of haters who worry that the viral phenomenon doesn't adequately explain ALS, or might be distracting from other deserving charities. But the numbers don't lie: ALSA raised over $31.5 million dollars in just three weeks, nearly 17 times the amount raised over the same time period last year.

Shaw's diagnosis could be related to NFL head injuries. A 2012 CDC study found that former pro football players were more than four times as likely to die of ALS or Alzheimer's than the general public, while the overall risk of dying of some form of brain or nervous disorder among players was threefold. Linebackers and defensive running backs were all at particular risk of developing neurological conditions.

According to sports injury litigator Paul D. Anderson, Shaw qualifies for the maximum possible payout of $5 million from a $765 million settlement between the NFL and 5,000 former players in 2013.

The Ice Bucket Challenge may have seemingly reached full saturation, but putting Shaw's face on it may give it another boost and help raise some more money for the disease. In an interview with the Tennessean, Shaw said that he was "not scared to die, but the process is a little daunting ... But I think the thing I want to focus on is there is going to be a way to cure this disease, we just don't know what it is yet. But we are close."

If you still doubt that the campaign is helping, you should watch ALS patient Anthony Carbajal's message to critics below: