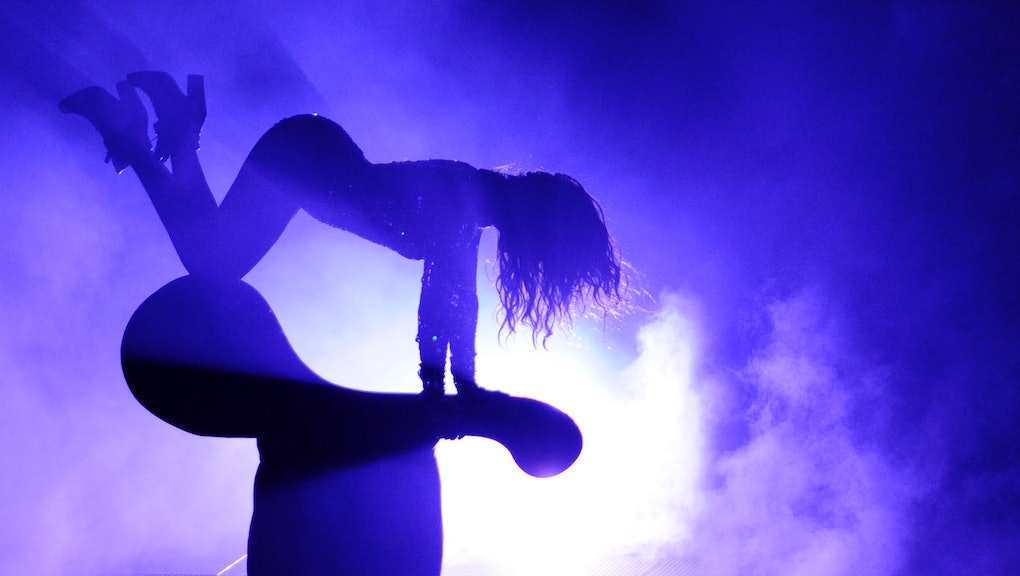 Beyoncé Doesn't Have to Choose Between Her Sexuality and Feminism

Can a woman simultaneously objectify herself and be a symbol of female empowerment?

This question — which is part of an ongoing discussion about feminism in pop culture — jumped to the forefront of the Internet's consciousness recently after a viral video from spoken word poet Madiha Bhatti asked whether women in the music industry, and Beyoncé specifically, should be held accountable for potentially perpetuating sexist stereotypes. While holding the music industry accountable should be an ongoing pursuit, Sunday night's MTV Video Music Awards proved that for female artists, sexuality and empowerment aren't mutually exclusive.

This debate predates Beyoncé. But the most powerful woman in show business certainly didn't shy away from it when she performed during the VMAs in front of a giant "feminist" sign wearing a bustier.

More than a few social media users seemed unable to compute this paradox. In fact, the image below stirred more debate on social media than even Nicky Minaj's wardrobe malfunction — a big deal given the Internet's well-documented affinity for nip slips. Add this to gender scholar bell hooks famously comparing Beyoncé to a "terrorist," and it's clear the question is still contentious, even within the feminist community.

Into this complex debate stepped Bhatti, a young woman who powerfully articulated her own discomfort with how we glamorize certain figures in pop culture without considering the costs of the conflicting messages. Bhatti, a Muslim-American poet based in Thailand, has crafted a compelling argument revealing the tension between self-objectification and feminism.

In her video, Bhatti asks musicians to "stop polluting the minds of our men and our boys" and asks if "anyone know that Beyoncé is smart" because "if she was a boy even just for a day, she wouldn't have to crawl on all fours to crawl up the charts."

Although Bhatti appreciated Beyoncé's performance last night at the VMAs, she told Mic that she wasn't sure if branding oneself as a feminist necessarily resolves the underlying problem.

"I'd say Beyoncé and other artists have done positive things for feminism, identifying with it in such a public way is just one example," she told Mic via email. "But you can advocate for social justice and still be complicit in systems of racism, patriarchy, exploitation," she told Mic.

Bhatti's poem is compelling. But even if we assume that celebrities should be held accountable, is there something wrong with a woman portraying herself as a sexual object?

The distinction here between objectification and self-objectification is an important one. Almost everyone can agree that people objectifying women is a bad thing. Indeed, according to researchers, being subjected to an "objectifying gaze" doesn't only lower one's ability to complete cognitive tasks like math exercises, but also has disparate effects on their mental health by exacerbating problems like depression, anxiety and eating disorders.

But this process of internalizing a sexual gaze — what happens during and after the actual objectification — affects women and men differently. One explanation for this phenomenon is that society values men for their intrinsic qualities. If you have been told your entire life that your brain is what defines your value, why would you allocate importance or resources to your appearance?

In a gender-equal world, Beyoncé could strut her stuff freely because she wouldn't have to prove her intelligence, even if she was shimmying in a tight-fitting dress. Men have the liberty of shaking their hips without their intelligence being questioned, but women don't.

So, ultimately, is the problem that Beyoncé performs "on all fours," as Bhatti notes in her poem, or that we assume certain things about women on all fours. Moreover, what if Beyoncé wants to crawl on all fours? The problem isn't self-objectification, it's the sexism that puts down women who engage in it.

Although award shows usually make feminists cringe, this year's VMAs gave us hope. And it wasn't just Beyoncé, last night's award show was all about the ladies, so much so that New York magazine is (ironically) asking if there was a feminist conspiracy. As Eliana Dockterman at TIME points out, "This year's VMAs were all about empowered women," a far cry from last year's Robin Thicke and Miley Cyrus creeptastic performance that had us talking about the lack of role models for young teenagers watching.

Whether it was newly self-described feminist Taylor Swift swaying to an all-female band and male back-up dancers, or Beyoncé jiving to an ode to female sexual pleasure, that they were doing it while dressed provocatively is irrelevant. Even Nicky Minaj's intercourse simulations, albeit sexual, came off as empowering, especially if we consider her exceptional talent to deliver impromptu feminist rants.

As an added bonus, women didn't only rule the show, they also took home a majority of the trophies.

So can female artists proudly identify as feminists while taking pleasure in self-objectification? Perhaps the answer lies somewhere between Beyoncé's affinity for pantless outfits and her penchant for penning essays about gender equality. Maybe the modern woman shouldn't have to choose.