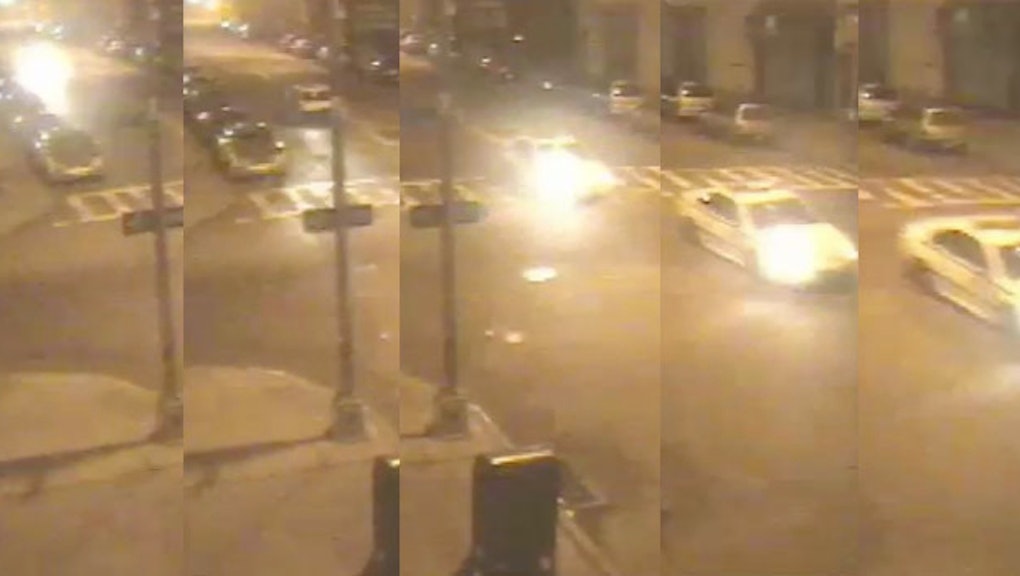 Did the NYPD Just Cover Up a Police Murder?

The news: Newly released footage from the New York City Housing Authority looks an awful lot like the NYPD deliberately covered up a police murder.

In February 2013, a patrol car struck and killed 24-year-old student Ryo Oyamada in a traffic accident at the corner of 40th Avenue and 10th Street in Queensbridge. Gothamist reports that while the NYPD has refused to release any video footage of the incident, attorney Steve Vaccaro was able to obtain NYCHA surveillance tapes via a Freedom of Information request.

Oyamada--10th and 12th Street Cameras from Vaccaro and White on Vimeo.

The NYPD told Oyamada's father that the car had been responding to an emergency call and had its lights flashing and siren on at the time of the collision. But Gothamist contends that some witnesses claimed Officer Darren Ilardi only turned on his lights after he had fatally struck Oyamada.

According to Gothamist's John Del Signore, the video (seen below) seems to back up the civilian witnesses of the incident, which appears to show the cruiser speeding just one block before hitting Oyamada without its lights on. Oyamada's family also claims that radio transcripts provided by city authorities indicate Ilardi was lying about having been assigned to the emergency incident, an ultimately unfounded report of a knife attack, which the video captures other officers responding to without urgency.

Oyamada--10th and 12th Street Cameras from Vaccaro and White on Vimeo.

Vaccaro speculates that the footage was deliberately edited to remove evidence of the crash scene. According to Gothamist, responding officers dispersed all witnesses and no firsthand viewers' testimony was included in the police report. The department has also failed to release a Collision Investigation Squad report on the death.

Ultimately, these details heavily suggest at least some of the official explanation for the accident (especially the NYPD's claim that the cruiser had its lights and sirens on at the time) is either fabricated or deliberately misleading.

The background: The NYPD is the largest municipal police force in the United States and one of the most professional and well-funded, but repeated incidents have demonstrated that New York law enforcement agencies aren't immune from allegations of misconduct.

An internal NYPD memo on the death of Eric Garner, the Staten Island man who died after being put in a banned chokehold in July, omitted any potential wrongdoing on the part of officers. Six U.S. congressmen are now petitioning for a federal investigation. Earlier this month, a scathing federal review of conditions at New York's Rikers Island prison found that male teenage inmates had their civil rights systematically violated via guard-encouraged violence and excessive use of solitary confinement. In 2011, Vaccaro sued the NYPD over its failure to adequately investigate pedestrian deaths; the department eventually changed policies in 2013.

Now that major publications like the New York Daily News have picked up the story, it appears that Oyamada's family may finally be given the hearing they deserve — and we'll likely learn whether the death was as suspicious as it looks.