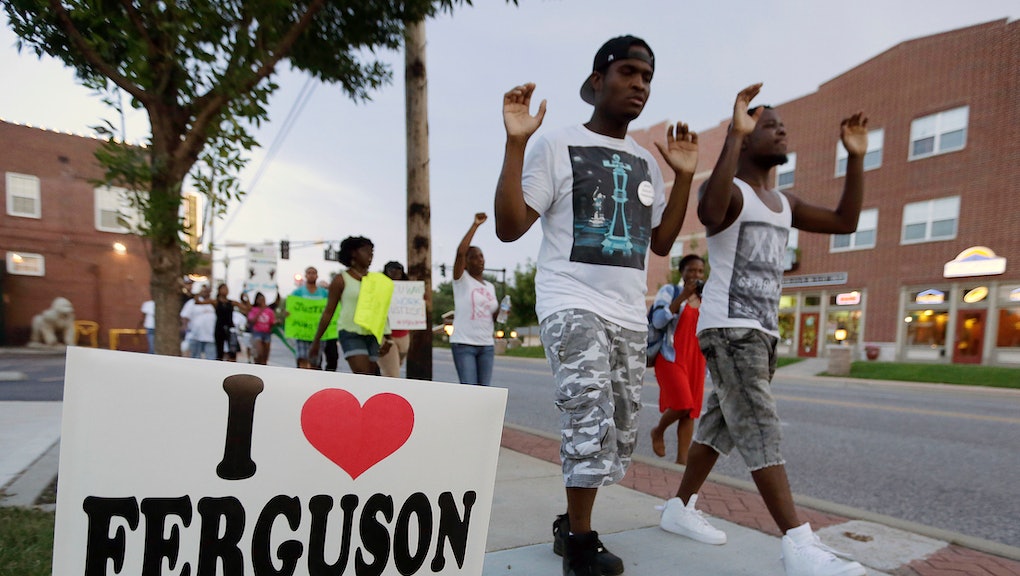 One Teacher's Moving Campaign Is Inspiring Hope in Ferguson

The news: A teacher in North Carolina has mobilized nearly 5,000 people to donate over $150,000 to help pay for low-income students' meals in Ferguson, Mo. on Fundly.

School openings in Ferguson have been pushed back twice thanks to mass protests and police reprisals following the death of 18-year-old Mike Brown on Aug. 9, with the date now postponed 11 days to Aug. 25. If protests continue, the deadline may be pushed back even further.

The Ferguson-Florissant School District planned on rolling out a federally-subsidized free lunch program for all students beginning this school year, so its delay could leave many students hungry. "Feed the Students of Ferguson" will distribute food directly to needy families until school resumes.

As the world watches the events unfolding in Ferguson, many people have thought "how can I help?". As a public school teacher, my first thought is always about the children involved in any tragic situation like this. When I found out school had been canceled for several days as a result of the civil unrest, I immediately became worried for the students in households with food instability. Many children in the US eat their only meals of the day, breakfast and lunch, at school. With school out, kids are undoubtedly going hungry.ALL OF THIS MONEY WILL GO TO FEED KIDS IN FERGUSON. A dollar or a hundred dollars, it doesn't matter. You will be helping to put food in the mouth of a child who needs it. Regardless of your opinion on the civil unrest in Ferguson, there is no need for innocent children to go hungry because of it.

Proceeds will go to the St. Louis Area Foodbank, which will connect with families in need throughout Ferguson.

This will really help: It's hard to see Ferguson at the center of such a politicized tragedy, but Mendelsohn's project will do some real short-term good in the community. According to the Brookings Institution, nearly all of Ferguson's neighborhoods have at least 20% of residents living below the poverty line, a threshold that marks an area with deeply entrenched concentrated poverty. One in four residents in the city lives below the poverty line. For many students, the difference between a healthy meal and going hungry is attending school — $150,000 can go a long way towards helping some of them bridge the gap.

Nationwide, three-quarters of teachers report that they have students who commonly show up to school hungry and half say that hunger poses a serious problem in their classrooms.

Bustle's Abby Johnston notes that other people are pitching in to do their part, too:

Volunteers at the local public library are providing lunch while teachers give grade-level classroom instruction to children at no cost to parents. On Tuesday, 150 teachers took to the streets of Ferguson — where their students live — to clean up debris from the protests the night before.

It's nice to see people rallying in support of Ferguson. But it behooves you to remember that if police hadn't repeatedly escalated their response to protests against Brown's death, there might not have been a school delay to begin with.