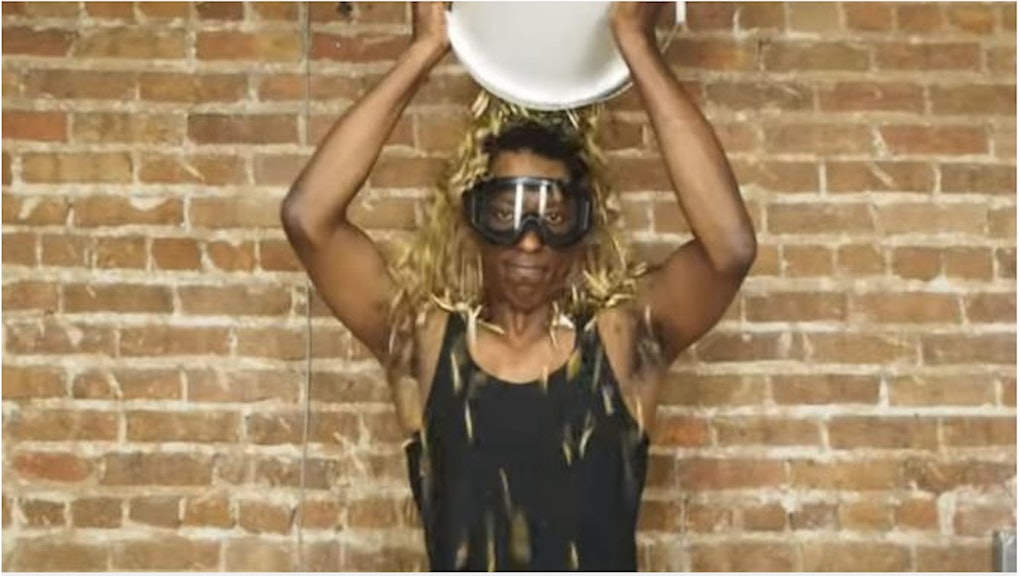 This isn't your typical bucket challenge.

According to the New York Times, the ALS Ice Bucket Challenge has raised $41.8 million from July 29 to Aug. 1 through what initially seemed like an awareness-raising gimmick. But the challenge, taken up not only by regular people but celebrities, including Oprah, Bill Gates and Anna Wintour, has become an empathic rallying point for human kind in a summer punctuated by tremendous violence and death around the world.

Taking his cue from the campaign, Sleepy Hollow star Orlando Jones has created his own video — with a significant twist. Instead of ice water, Bloom poured out a bucket of shell casings in order to raise awareness of an epidemic of a different sort: racial injustice.

"This past week I've watched an American city become something akin to a war zone," Jones told Fusion, speaking of the continued unrest in Ferguson, Mo., following the death of Michael Brown.

Unfortunately, as Jones notes, this violence isn't unique. Rather, it is emblematic of America's racial tensions, born out of a history of slavery and a country that either does not know how to, or does not really want to, address the systemic changes needed. Slavery may have ended in the 1860s, but during the ensuing centuries, slaves, former slaves and free black men and women were incarcerated by a nation of white people who didn't want to create a more dynamic, multiracial society.

Instead, racial tensions were manifested in other ways throughout the 20th century, from Jim Crow Laws to voting inequality. Jones, who is a lifelong member of the NRA, points out that the "bullets" in his bucket challenge may be suggestive, but he's not "pointing fingers."

In an interview with Fusion, he uses a personal anecdote to highlight how important guns were in his family, and African-American families like his in the mid-20th century, as a means of self-protection and defense:

I had a cross burned in my front yard when I was in the 6th grade. I grew up in the Deep South and I have a very intimate relationship with race. My father carried a gun. Did he carry it because he was some thug or anarchist or wanted to hurt people? No, he wanted to protect his family. For me, I became a member (of the NRA) because I wanted to affect change in the organization. Do I share all of their ideals? No. I'm not a monolith in culture. I don't agree with all black people on everything either. I'm a complex person and I wanted to make that point.

It is a narrative that echoes that of Angela Davis', Assata Shakur's and Malcom X's, individuals who heralded guns as symbols of protection, not necessarily aggression. To quote Davis: "We were confronted with the possibility of being attacked by armed police at any given moment. I purchased a weapon. Most people had guns and we bought guns, not because we were intending to use them in any offensive way, but because we needed them in order to protect ourselves, to defend ourselves."

As many civil rights activists and leaders have noted over the last 60 years or so, this narrative has since been manipulated by a criminal justice system that is stacked against minorities. But even the homicides of young black men across the country — Trayvon Martin being the most prominent, recent example — have been "excused" by false assumptions that innocent black men were carrying guns.

In a way, Jones' bullet challenge is really a smart retort to the culture of racial violence connected to guns — one that Sarah Silverman and David Alan Grier parody in this Funny or Die skit about creating the Black NRA:

Jones is challenging all Americans, white, black, male and female, to take responsibility for fostering or enabling this culture of racial violence: "I'm challenging everyone. I'm saying that I'm pointing the finger at myself and holding myself accountable. If you feel the way I do, you can do something. Whatever your challenge is, if you want to write letters, whatever you want to do, spread the message to affect change."

Will you take the bullet bucket challenge?