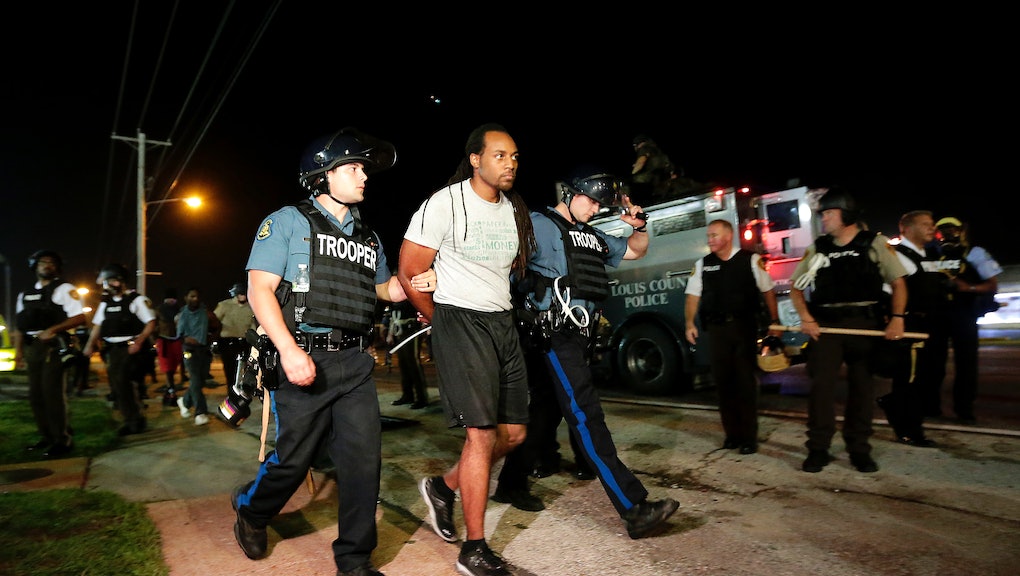 Well, this explains a lot. A glaring racial divide between police and residents in Ferguson, Mo., is at the heart of recent tensions in the St. Louis suburb. Since Officer Darren Wilson shot and killed 18-year-old Michael Brown on Aug. 9, much has been made of a particular statistic: 65% of the city's denizens are black, while 90% of the police force is white.

Whites also make up just 11% of Ferguson's population, leading the FiveThirtyEight to surmise that most cops live outside the city.

This is emblematic of a much bigger problem: Among the 75 U.S. metros with the largest police forces, 60% of officers don't even live in the cities they patrol.

This is obviously a hindrance to developing positive relationships with the communities they're sworn to protect. It certainly legitimizes the perception that police in Ferguson are more occupying force than community partner.

That and the assault rifles.

Perhaps unsurprisingly, this divide persists even among the police officers. FiveThirtyEight reports that in these 75 urban centers, 49% of black and 47% of Hispanic officers live within city limits, on average, compared to just 35% of white officers.

In places with large black populations — Jackson, Miss., Memphis, Tenn., Birmingham, Ala. and Baltimore, Md. — this gap is especially notable: 57% of black officers in Detroit, Mich., live in the city, while just 8% of white officers do, for instance.

Some metros have police residency requirements, like Boston, Ma., and even St. Louis, Mo. But these are generally loose and, in many cases, flaunted, according to FiveThirtyEight.

Why this matters: The hostility in Ferguson over the past two weeks has largely centered on disparities in police treatment of black residents. With blacks constituting 86% of traffic stops, 92% of searches and 93% of arrests after stops in 2013, the undercurrent of race informing these interactions was destined for a reckoning.

As long as white officers stay isolated from the spaces they patrol, it remains likely they'll remain divested from and hostile toward black communities. Brown's murder was the tipping point. But if the same geographical and racial distance remains in place, relations between Ferguson police and residents stand little chance of improving.