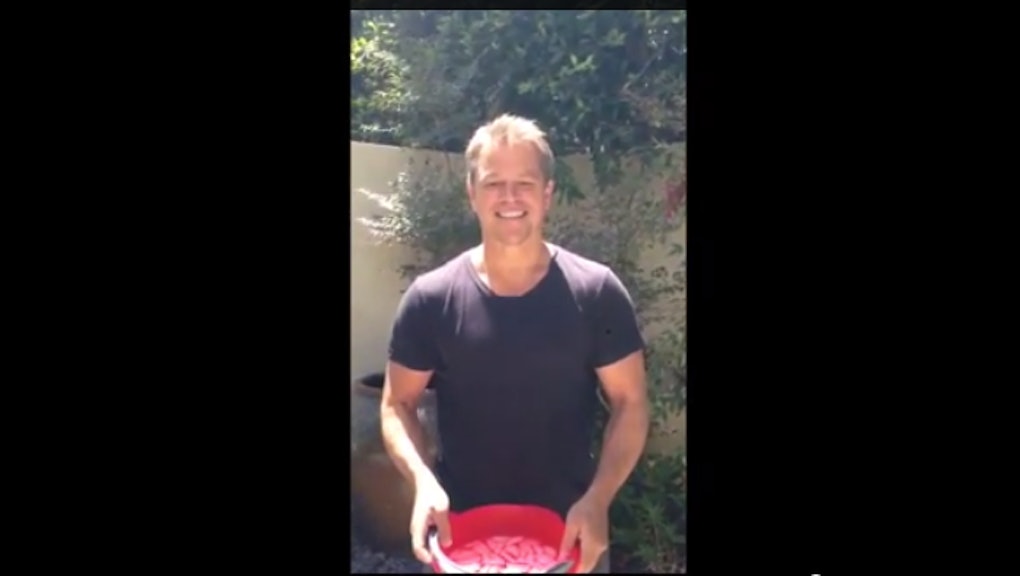 The ALS Ice Bucket Challenge has clogged our newsfeeds for weeks and inspired some vehement debate about its effectiveness and ethicality in the process. Does this awareness campaign really achieve anything? With a massive drought in California, why are Californians dumping water on their heads? And, more globally, how are Westerners so OK with wasting this much water when many people around the world don't have access to a clean bucketful of water to begin with? Matt Damon tackled this last question head-on with his Ice Bucket Challenge video, using toilet water to raise an incredibly important issue: water scarcity.

With the challenge using up over 5 million gallons of water so far, Damon used his challenge to shed light on some truths behind the important issues circling all the backlash. While prepping his toilet-water bucket, Damon uses the platform to dispense information: there are "800 million people in the world" who don't have access to clean drinking water, and 2.4 billion people without adequate sanitation. His choice of toilet water is an effort to highlight those themes.

Damon's devotion to the cause is not confined to this single video. He also co-founded Water.org, a charity that focuses on solving these very issues through "affordable credit for water and sanitation improvements."

"Keep in mind," he says in his ALS video, "that the water in our toilets in the West is actually cleaner than the water that most people in the developing world have access to."

Damon's message is heard loud and clear and is one with important resonance. According to statistics gathered by Water.org from the World Health Organization and UNICEF, 3.4 million people die every year from water-related diseases, including a child every 21 seconds. It is also estimated by both organizations that more people in the world have a mobile phone than a toilet.

Damon's decision to both support a good cause and highlight his own international one gives his video a great deal of importance. If you watch one celebrity drench themselves, it should be Matt Damon. Nobody else has managed to make as much of a splash.