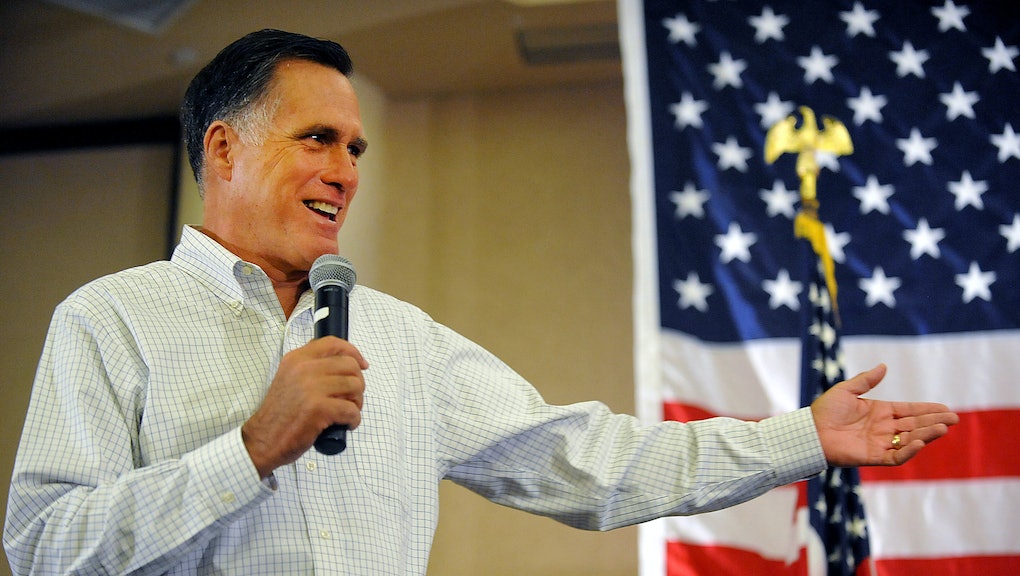 Everyone has Mitt on the mind.

A poll released yesterday showed that Mitt Romney, the 2012 Republican nominee for president, would command 35% of the vote in Iowa if he were to jump in the race. The Suffolk University/USA Today survey found the former Massachusetts governor was the top choice for Iowa Republicans, coming in far ahead of Mike Huckabee, Rick Santorum, Chris Christie, Jeb Bush and others. (The sample size was small, so caveats apply.)

The poll came a day after Romney ever-so-slightly entertained the possibility of a presidential run, saying there was a "one of a million" chance he would jump in the race. In an interview with conservative radio host Hugh Hewitt, Romney said:

I had the chance of running. I didn't win. Someone else has a better chance than I do. And that's what we believe, and that's why I'm not running. And you know, circumstances can change, but I'm just not going to let my head go there ... Let's say all the guys that were running all came together and said, 'Hey, we've decided we can't do it, you must do it.' That's the one of the million we're thinking about.

Stranger things have happened, but the nostalgia for Mitt Romney shows something bigger at play — specifically, the vacuum of leadership within the Republican Party at the presidential level.

For the last several cycles, the Republicans have ended up nominating the candidate who was next in line in the minds of the Republican establishment, and who they believed could appeal to general-election voters. In 2012, it was Romney, who had run to the right and lost in 2008. In 2008, it was John McCain, who had long been a thorn in the side of the Republican establishment before going to great lengths to make amends and secure the nomination. In 2000, it was George W. Bush, who by virtue of his name and pedigree was positioned as the establishment candidate.

Heading into the 2016 primaries, no Republican is positioned to be that kind of establishment candidate. Chris Christie was for a time, but that was before the scandal surrounding the closure of the George Washington Bridge eroded his national standing. Jeb Bush is perhaps the most likely to woo the GOP establishment, but even Republicans are wary of his last name and the fact that he hasn't faced voters in over a decade.

The longing for Romney among some Republicans (and those in the media) is indicative of the fluidity of the present Republican field, and it's ultimately misguided. Yes, Romney is a tremendous fundraiser, and he's been through the ringer twice before. But Romney was always a better candidate on paper than he was on the campaign trail. Republicans hoping for a third run tend to gloss over just how many self-inflicted wounds accompanied his previous two forays into presidential politics.

Romney probably won't end up running for president. But the fact that many Republicans are holding out for the Great Mitt Hope shows just how dissatisfied they are with the present field. Until (and unless) the Republican establishment sets its sights on another candidate, Romney nostalgia will keep bubbling to the surface.